YAZOO CITY – (AP) It’s so hot in the Mississippi Delta that high school students are going into the snow cone business.

James David Ingram opened Delta Snow in a trailer near the downtown of this town of 11,000 people.

The trailer is air-conditioned, which 17-year-old Ingram says was a key consideration. 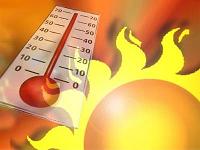 Yazoo City hit record highs of 99 degrees both Sunday and Monday and topped that with a record of 100 on Tuesday.

On Wednesday, there was a steady trickle of customers seeking the fluffy shaved ice topped with neon sugar syrups. Big sellers include strawberry, black cherry and green apple, he said.

What’s not selling is nachos, which Ingram envisioned as a sideline to the frozen treats. Whether the high temperatures were a contributing cause was unclear.

“We can’t give nachos away,” he said.

The snow cone business is crowded in Yazoo City, with Ingram counting at least four competitors. He’s still trying to pay off the $1,500 investment in an ice shaver and the $500 in flavor concentrate.

“If we make $100, we’ve had an outstanding day,” said his grandmother and business partner, Margaret Gainey.

The heat seems to have helped a bit. Gainey, flipping through a pad where she records orders, said Tuesday was “busier than most.”

Ingram went into business after he couldn’t find a summer job that suited him. He said he’s a budding entrepreneur.

Around Mississippi, similar scenes were playing out as the Magnolia State tried its hardest to find some shade and get out of the blistering early summer heat.

It’s not that summer is expected to be a cool season, but the heat wave appeared to be digging its heels in for the long haul as the Fourth of July holiday neared.

In rural areas, farmers were watching the skies over corn and cotton fields and hoping a little rain might quench their crops. But weather forecasters were holding out little hope of relief over the next few days and expectations for temperatures near or above 100 degrees were widespread for most of the state.

One place where the heat wasn’t necessarily a bad thing is the sand-lined Mississippi Gulf Coast.

Tourists eager for a dip in the cooling Gulf of Mexico, in between forays at casinos and other local attractions, were expected to keep coming despite the heat wave.

Taryn Sammons, spokeswoman for the Mississippi Gulf Coast convention and visitors bureau, said white sand and blue water are something of a tonic this time of year.

“When I’ve been out driving around, there have still been people on the beaches,” Sammons said Wednesday. “People expect it to be hot. But it’s really breezy. That’s the good thing about being out on the beaches – you get that nice Gulf breeze.”