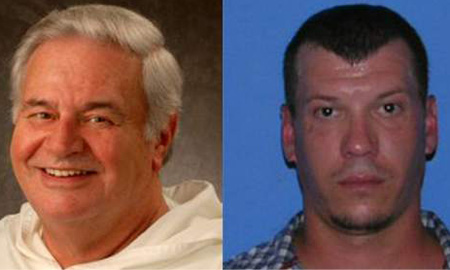 JACKSON – An autopsy of a man accused of killing a Roman Catholic priest and taking the victim’s car on a family vacation to Walt Disney World showed he died in a jailhouse suicide, a coroner said Friday.

The Mississippi Department of Corrections has confirmed that state inmate Jeremy W. Manieri was found deceased in his cell by correctional officers at the Central Mississippi Correctional Facility (CMCF) at approximately 5 a.m. on Thursday, January 26, 2012.

Preliminary information suggested a possible suicide and that Manieri hung himself a sheet.

MDOC officials said 33-year-old Manieri was serving a five year sentence for Failure to Register as a Sex Offender out of Hancock County.

The Rankin County Coroner, Jimmy Roberts, said the medical examiner’s office has also concluded that Manieri committed suicide, and his death was listed as “death by hanging.”

Suicides at all MDOC facilities are investigated by the MDOC Corrections Investigation Division and the Mississippi Highway Patrol.

Manieri had been charged with shooting the Rev. Ed Everitt of Hammond, La., in July 2011 at a beach house in Waveland, Miss.

Manieri’s attorney, Brian Alexander, said he was told Manieri was found in his cell at the Central Mississippi Correctional Facility in Rankin County, east of Jackson.

“I’m shocked that he died in that way, but I know he expressed to me several times that he had no confidence that he was going to get a fair trial,” Alexander told the Associated Press. “I think the fact that he was unjustly condemned by the attorney general was in no small measure a factor in his discouragement and despair.”

Manieri’s image was used in a campaign commercial for Mississippi Attorney General Jim Hood during his successful reelection bid last year. Manieri’s lawyer filed a bar complaint against Hood over the commercial, claiming Manieri couldn’t get a fair trial because the ad referred to him as a cold-blooded killer. Hood, a Democrat, was elected to a third term.

The commercial was used to portray Hood’s opponent in the race, a former judge, as being week on crime.

Hood’s spokeswoman did not immediately respond to a message Friday. His office has said in the past that they can’t discuss the matter because of the complaint.

Manieri was being held in the sprawling prison on a five-year sentence for a probation violation related to a sex offense. Prosecutors had been expected to present evidence in Everitt’s death to a grand jury this year.

Mississippi Department of Corrections spokeswoman Tara Booth said Manieri was in his cell alone. He was not on suicide watch and had not been in the past.

Manieri was accused of killing Everitt, better known to parishioners in Louisiana as Father Ed, at a beach house that priests used as a retreat. Manieri was a handy man who did construction jobs around the house.

Police say Manieri shot the 70-year-old Everitt with Everitt‘s gun, then picked up his ex-wife and kids in Everitt’s silver Chevy HHR and set out for Florida. They planned to get an early start at the theme park the next day, but Manieri was arrested when he walked outside his hotel near Winter Haven, Fla., to have a cigarette.

Authorities say Manieri gave a detailed confession to investigators in Florida, but stopped cooperating by the time he returned to Mississippi.

Manieri allegedly told Florida authorities that Everitt picked him up the day of the slaying and they ate lunch at the Silver Slipper casino. He claimed they got drunk and high on marijuana and he passed out. He claimed when he woke up, Everitt was fondling him.

Manieri told police he went outside to smoke a cigarette, then went to the bedroom and got Everitt’s .380-caliber pistol and shot the cleric twice in the head.

Authorities have said preliminary tests found marijuana in the priest’s system, but the results of more reliable toxicology tests have not been made public.

Investigators said robbery was the motive and that Manieri was caught with Everitt’s car, gun and wallet.

Manieri was a convicted sex offender who could have been in prison at the time of Everitt’s death if not for what authorities have described as a computer “glitch.”

Manieri pleaded guilty to molesting a girl in 2006.

He was sentenced to two years, but one year was suspended and he was given credit for time served. That was the case referenced in the campaign commercial for Hood.

When he was released, Manieri failed to register as a sex offender and was sentenced to another 16 months. He was put on probation when he was released but never met with his probation officer. He could have been in prison for that at the time the priest was killed, but it went unnoticed. The state corrections agency blamed the oversight on a computer system glitch.

After his arrest in Everitt killing, he was charged with a probation violation for not meeting with the probation officer and sentenced to five years in prison.