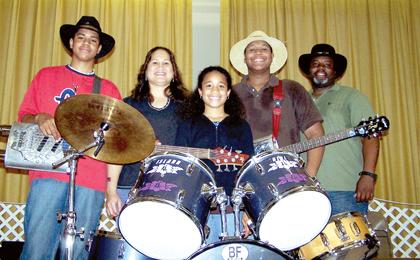 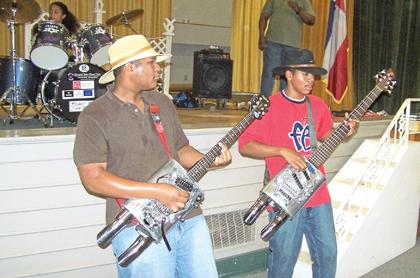 Tricia Perry said she doesn’t have a musical bone in her body.

After an early attempt to play the piano failed, she decided not to pursue a musical career. But what she lacks in musical ability she more than makes up for in love and support for her family.

For the last three years, Perry’s children have been burning up the blues’ circuit with their energetic renditions of classic blues favorites. But since they’ve been writing and recording their own material, the Homemade Jamz Blues Band has been singing – and playing – to their own drum. And, this week they’ll perform at a festival in Europe.

As a singer and lead guitarist, 15-year old Ryan Perry heads the group, followed by his brother, Kyle, 13, on bass, and little sister, Taya, 9, on drums. Both Tricia and her husband, Renaud, who plays harmonica with the group, manage their children’s careers.

“This is a totally different sector than what I had imagined for my kids,” Tricia Perry said. “Music wasn’t even on my mind or forming a band. When Ryan started to play, we thought it was cute and like any parent, we supported it. But we never thought it would go anywhere. And even when Kyle got involved, we thought it was cute and it was good for a little extra money for them. But we didn’t think it would be anything like this.”

The phenomena of the Homemade Jamz Blues Band has exploded. And everywhere they go, they leave a trail of loyal fans captivated by their onstage presence.

That support was further confirmed when the band competed at the Third Annual Blues Challenge sponsored by the Indianola Blues Society in 2006. They won that competition, and in 2007, went on to become the youngest blues band in history to enter the annual International Blues Challenge in Memphis, Tenn. After competing against nearly 100 bands from all across the globe, Homemade Jamz won first place in the blues category. In 2008, they were voted best new blues artists of the year by the West Coast Blues Society.

Homemade Jamz Blues Band has been featured on local and national television programs including CBS Sunday Morning News, as well as several national publications. Since then, they’ve also performed across the country making their mark as a true voice in the blues music arena.

Both parents agree their children have a natural ability. And that ability was realized while Renaud was serving in the military and purchased a guitar.

“I bought it and didn’t do anything with it,” Renaud said. “But Ryan found it, asked me could he have it and I said yes.”

The family had just returned to Tupelo from Baumholder, Germany in 1999. And in 2001, Ryan signed up for guitar lessons.

“He and his dad played around with it,” Tricia said. “And Ryan learned to play by ear. He took traditional or basic guitar lessons for a year and became very bored with that. But we kept him in the class because we wanted him to learn the notes. But we realized that wasn’t doing any good. He was such a quick learner and he wanted to learn a song.”

Four instructors later, and at the tender age of 9, Ryan began performing solo at local community events with the aid of a drum machine. Soon thereafter, 7-year old Kyle wanted in on the act but was quickly bored with the piano and guitar.

“He was frustrated,” Tricia said. “And we told him that maybe his call was somewhere else. Maybe it wasn’t music and maybe he should just let it go.”

It wasn’t until Kyle saw a bass player on television that his parents realized where his true talent was.

“They were watching a DVD of a musical when my husband noticed how much attention Kyle was paying to the bass player,” Tricia said. “He asked him if he’d like to try that instrument, and Kyle said yes.”

On his ninth birthday, Kyle was given an amplifier and a bass guitar, and his career was well on its way.

“It was like magic,” Tricia said. “By the end of the first week, he had managed to learn almost all the bass tunes to the songs his older brother was performing. He had pretty much taught himself to play and he never looked back.”

A local boy was soon brought in as a drummer for Ryan and Kyle, who were once again performing at local events. But within four months, a conflict with the boy’s family led to their dissolution. While using this time off to learn more about the music business and write their own songs, the natural talent of the Perry’s third child, six-year- old Taya, surfaced.

“In October 2005, we put Taya in drum lessons,” the mother said. “She was already playing the tambourine with the boys. And one day in December 2005 while the boys were practicing, she asked if she could jump behind the drums and play. She jumped right in and she was able to keep the pace and she was able to keep the beat. And we realized then that she could play the drums.”

The Homemade Jamz Blues Band was officially born, and in December 2007, they signed a recording contract with Northern Blues Music. Their first professional CD, “Pay Me No Mind,” is set for worldwide release this June.

The CD features the band’s rendition of the title track by John Lee Hooker and 10 original songs written by Homemade Jamz.

After a performance at Montgomery County High School in Kilmichael earlier this week, Tricia said she’ll spend the next several days, including Mother’s Day, with her family in Holland, where the band will perform at the Kwadendamme Blues Festival and a local blues club.

Within the next few months, Homemade Jamz will travel to Arkansas and Florida before returning to Mississippi to perform at the B.B. King Homecoming Festival in Indianola on June 6, and the Highway 61 Blues Festival in Leland on June 7.

Spending so much time on the road, the Perrys decided to take their children out of the Tupelo Public School System and home-school them instead. Tricia said it was difficult for the youngsters at first, but it was an adjustment they quickly made.

“They’re children,” Tricia said. “It was hard for Ryan and Taya to leave school because they had friends that they were really close to. But now Ryan is okay with it. He doesn’t have to make up days and schoolwork for being on the road so much and he won’t be behind. And he still goes to see his friends at school. They call him and email him when they have gatherings and it’s the same thing with Taya. Kyle, on the other hand was ready to leave school. He’s really smart and he needed to be challenged in school and he wasn’t. So he was bored.”

Tricia also said that while so much time on the road can be demanding. It’s brought her family closer together and closer to their dream.

“We travel together. We eat together and sometimes we stay in the same hotel room together,“ she said. “But I want them to conquer the blues world in more ways than expected, especially with their age and ability. They have a lot of musicians and critics looking at them…and I want them to prove those folks wrong and prove to themselves what they truly are, and to be successful in the blues world and even beyond that. I’m ecstatic and happy that they’re able to do what they do without me having to pull out a whip,” she said further.

“This music and talent comes from them. There’s no way I can make them do it. I don’t know how. But I can help them by supporting them and taking it as far as we can as a family.”