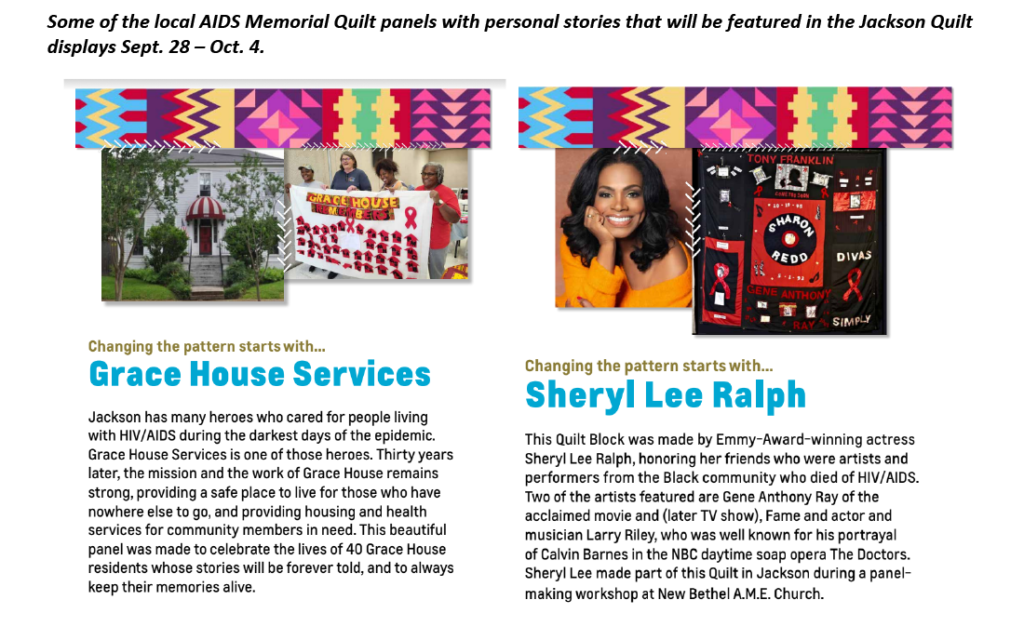 A week of free Quilt displays and events honoring black and brown lives lost to AIDS has been going on in the City of Jackson and surrounding areas since Wednesday, September 28 and will climax Tuesday, October 4, 2022. The largest display ever in the state of Mississippi, the Quilt exhibition has launched the Change the Pattern initiative. Jackson and surrounding environs are the first to see the display which has numerous partners, but largely funded by Gilead Sciences with a $2.4 million grant.

This new initiative of the National AIDS Memorial, Southern AIDS Coalition and Gilead Sciences uses the power and beauty of the AIDS Memorial Quilt to disrupt systemic issues that impact health equity and continue to disproportionately impact communities of color and marginalized populaces.

Mississippi has the sixth-highest rate of HIV in the United States. Additionally, new HIV diagnoses remain high year after year.

Sections of the Quilt will sojourn to twelve southern states, reaching many communities via displays, storytelling, community events/programming and quilt-making workshops.

More than half of new HIV diagnoses occur in the South which comprises 38% of the US populace.

Furthermore, the Quilt is the largest community arts project throughout the globe. It now surpasses 50,000 individuals, sewn panels with more than 11,000 names stitched into its tons of fabric as it pays deference to the Black, Latinx, Indigenous, Transgender and other marginalized communities. 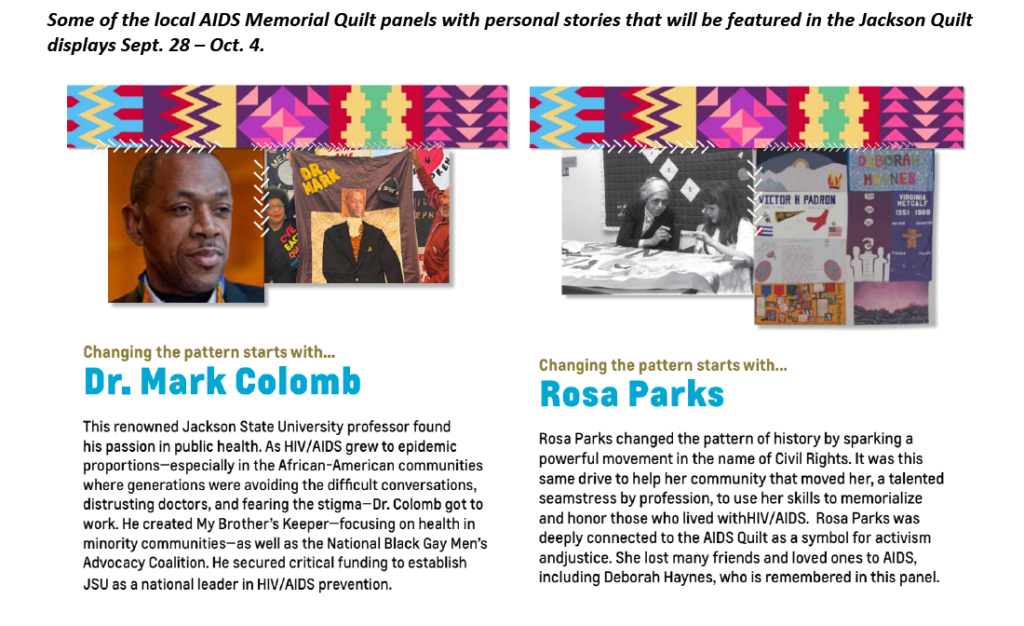 The first panels were stitched 35 years ago, but according to John Cunningham, CEO of the National AIDS Memorial, the Quilt endures as “a powerful teaching tool for health action, remembrance and social justice.”

The intent is to bring the Quilt to communities throughout the United States in the fight to alleviate apathy, to cure persons of AIDs and to serve as a catalyst for change.

Both Daniel O ‘Day (chairman and chief executive officer, Gilead Sciences) and Dafina Ward (executive director of the Southern AIDS Coalition) contended that the power of community is reflected in the Quilt which contains powerful stories, “critical to ending HIV-related stigma.”

Many Quilt panels on display honor and celebrate lives lost to HIV/AIDS from Jackson and the South to merge their stories with today’s crisis. Changing the pattern starts with: Jackson State University professor Mark A. Colomb (Ph.D.); 14-year-old Hemophiliac Michael Felton; Lavadious Walker, celebrated in the local Trans community; and Grace House for their residents. Included, as well, is a quilt made by legendary civil rights and justice activist Rosa Parks, a supporter of the AIDS Quilt.

Emmy Award winning actress Sheryl Lee Ralph is also featured. Ralph is a founding member of the DIVA (Divinely Inspired Victoriously Anointed) Foundation which she created in memory of the many friends she has lost to HIV/AIDS. She has a long history with the Quilt, creating the Quilt section that will be on display at the Mississippi Civil Rights Museum which honors and celebrates black artists, entertainers and friends who died of HIV/AIDS. Ralph made part of this Quilt in Jackson during a panel-making workshop at New Bethel A.M.E. Church in Jackson in 2012.

Special reading of Names of MS lives lost to AIDS remembered on the Quilt throughout the day. Free Museum passes for the public.

As a tradition with the AIDS Quilt to support HIV/AIDS service organizations doing important work in their communities, the National AIDS Memorial, Southern AIDS Coalition and Gilead Sciences are inviting interested Southern-based organizations to apply for funding through special grant programs through the Change the Pattern initiative.

Jackson Emergency Relief Fund is providing $100,000 in grants to support Jackson area HIV/AIDS service organizations to support their work and who have been impacted by the water crisis that continues in the region.

Quilt Panel-making Workshops Fund is supporting local quilt-making workshops throughout the South to help ensure the stories of black and brown lives lost to HIV/AIDS are captured through newly-sewn panels on the Quilt through the Memorial’s Call My Name program.