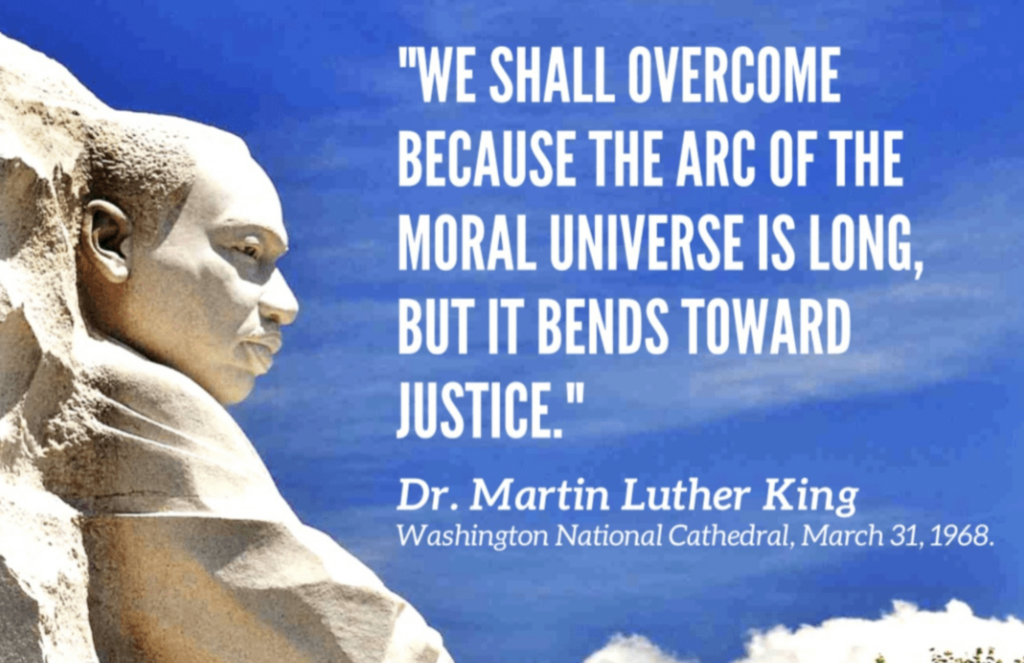 Journey Gray, a sophomore and biology major at Tougaloo College, was asked: How do you think the legacy of Dr. King impacted Mississippi, a man who was assassinated because he challenged a racist system in order to advance the rights of African Americans (and consequently other minorities)?

Gray responded, “Dr King’s legacy had a great impact on Mississippi. He resided mainly in Alabama, but we all are a part of the South and experienced and fought for the same rights. Watching him so close to home, surely gave people in Mississippi hope to fight and stand up for our rights.”

The sophomore was then asked: This year on the front burner of civil rights, we have leaders out in full force trying to “protect voting rights” – even as they celebrate Dr. King who died for those rights, what does that say about our country?

Gray related, “The fact that we still have to fight for what political leaders such as Martin Luther King were fighting for in the mid-1900s shows how non-progressive the country is; black people should not have to still fight for basic human rights decades later.”

Dr. Martin Luther King Jr. is symbolic of African Americans (and other minorities that have come afterward) gaining their citizenship rights. His crusade for human and voting rights was one that led to his assassination.

Journalist and historian Gustav Niebuhr said, “Dr. King’s murder was the most momentous among those of dozens who died in the cause of civil rights for African Americans.” Niebuhr also acknowledged the deaths of persons like Rev. James Reeb and Jimmie Lee Jackson and their roles in advancing civil rights and voting rights – yes, many died.

And just as recent as Jan. 6, 2022, the solemnness of acknowledging that a year earlier there was an insurrection launched against the U.S. Congress, the very seat of the democracy this country fought wars to attain and enjoy since 1776, for nearly 246 years – many have begun to reassess if the progress made can be sustained.

There is a sense of solemness over our nation that looms going into 2022. We have the history of a Revolutionary War and a Civil War, first to establish a democracy and then to live up to what the democracy claimed.

Yet in 2022, the U.S. congress is in a stalemate that will overshadow Dr. King’s commemoration, as there are 19 states that have passed 34 laws restricting voting rights, according to the Brennan Center (brennancenter.org).

These new restrictions go from having a shorter window to apply for a mail ballot and shortened delivery time, to limiting or eliminating mail ballot drop boxes, to voting rolls purged and reduced number of polling places made available.

For what is it to have the right to vote but the ability to get to vote is sabotaged. Reminds one of the old Jim Crow Laws where blacks would line up to vote to be met with questions such as how many jellybeans are in this jar?

Jamaal Davis, a sophomore majoring in computer science at Tougaloo College responded to the question: What does it say about America as a center for progress and Civil Rights, when we still have to fight so hard to maintain those rights?

He responded, “It means the enemies are camping right outside our bases, that they will be opportunistic in their attacks, that they will take any time we’re not steadfast to re-ignite their goals of previous battles. It is a subjective war.”

The Brennan Center further reports that “more than 440 bills with provisions that restrict voting access have been introduced in 49 states in their 2021 legislative sessions.” Although there is always a ray of hope to feed the next generation, we find that “between Jan. 1 and Dec. 7, 2021, at least 25 states enacted 62 laws with provisions that expanded voting access.”

The organization, All on the Line (AOTL) takes a look at how the former Trump administration “manipulated the census count of 2020,” to the redrawing of voting districts to either dilute the voting power of people of color or to boost the districts of predominantly white republican voters.

The organization also makes the appeal to pass the John Lewis Voting Rights Advancement Act and the Enhanced Voting Rights Act – a few battles were won, but no the war is not over.

One of AOTL’s advocates, former President Barack Obama, his presidency a significant marker of the power of voting, says, “Bloody Sunday should serve as a reminder that the march for our fundamental rights is not yet over. There are more steps to take and more bridges to cross.”

AOTL points out that the next battleground is “gerrymandering … when politicians pick their voters instead of voters picking their elected officials and it impacts communities across the nation.” AOTL is fighting for fair maps in redistricting. Some “redistricted voting maps” leave one to wonder – was that a “contortionist” feat?

Assessing the impact this political climate is having on our up-and-coming generations, we point to the fact that we owe so much to Dr. King – the man who gave his life for what he believed in.

Recapping what we should focus on this 2022 for the Dr. King Commemoration, Corrin Dixon, a mass communications major and junior at Tougaloo College, described how she sees this year’s state of affairs.

“Though Dr. King fought hard for our freedom and protested Jim Crow and encouraged equality, I sometimes feel his efforts were in vain. Yes, he did help accomplish a lot throughout society, yet he was assassinated and was unable to complete his mission.

“In certain areas with low income and usually black populations, they are only being allowed to vote in one location, instead of several throughout the district; voting poles are open from 8 a.m.-5 p.m., which are hours that people work, and now requiring a driver’s license or passport for identification verification, rather than a state issued id or insurance card.”

She explains that the elections in a democracy should be fair; don’t try to “fix” elections, don’t throw out ballots, or make it physically impossible for some demographics of people to vote at all.

“In 2022, we should not have to still be fighting to secure and protect our voting rights, a right that was supposedly granted us in 1965,” says Dixon.

Let’s pray that Dixon and the new generation of leaders can “hold the line.”

Lastly, AOTL posted the message today, Jan. 12, that “Senate Majority leader Chuck Schumer has signaled that if Republicans don’t come to the negotiation table by Martin Luther King Jr. Day, it is time to reform Senate rules to enable action on voting rights.

Commemorating Dr. King this year: Remember, the battle was won but the war rages on….