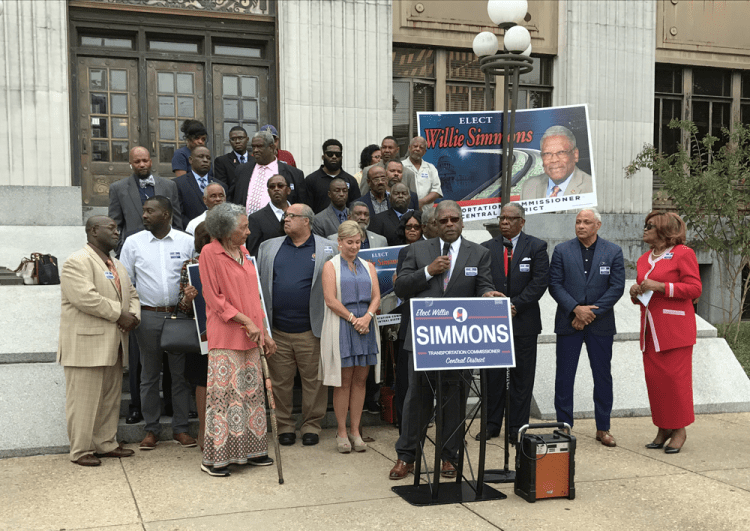 A press conference was held October 7 on the steps of the Hinds County Courthouse on behalf of Senator Willie Simmons, candidate for Transportation Commissioner of the Central District of Mississippi.

Simmons was surrounded by individuals who declared their support of his candidacy. Mary Coleman, former U.S. District 65 House of Representative, served as moderator.

Espy said Simmons is an able man of integrity and professionalism, whom he has known for thirty-five years. He said he knows his wife and children and he will use every fiber of his being to help get him elected to include knocking on doors, making robocalls and standing at podiums to speak on his behalf, even when he has a hoarse and raspy voice.

Espy spoke of the 27 years Simmons has represented his district in the Mississippi Senate and commended him for his work.  He said, “Most recently I traveled throughout the district Senator Simmons is campaigning in and saw all the potholes and bridges in need of repair.” Espy said he spoke with vendors who never were able to get appointments with those in authority for the possibility of receiving contracts. “When Simmons gets to MDOT, he will make sure everyone will have a chance to be represented, said Espy.

Clark said, “For so long the transportation needs for our people have been neglected and we now have a candidate in this race that will represent all 22 counties so that the poor and impoverished areas will not be neglected.”

Simmons thanked them all for their comments and wrapped up the press conference by claiming victory as the next transportation commissioner of the Central District.  He thanked those attending the press conference and going on record to support him. Simmons spoke of the work he has done for the past 27 years to include developing relationships which ensures him of being prepared for the task at hand. He spoke of his experience while serving as chairman of the Senate Transportation Committee and chairman of the sub-committee to put together a $1.3-billion transportation budget which was passed on to three commissioners. He said his experience has prepared him to become the one who will allocate that budget and he will make sure all 22 counties are treated fairly.

Simmons has represented Senate District 13 for 27 years where he advocated for affordable quality healthcare, quality education, equal rights and better job opportunities for all Mississippians. He thanked God, his family, his supporters and those who went to the polls and voted for him and encouraged all citizens of the Central District to vote for him in the upcoming election.