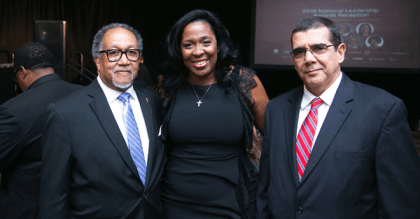 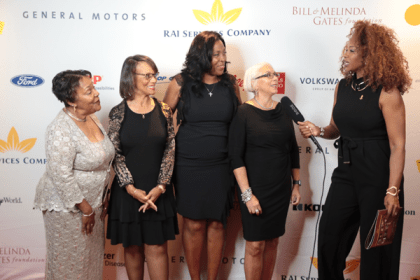 Each of the recipients joined NNPA corporate partners and sponsors to reflect on the importance of the Black Press.

“I’d like to particularly thank the Black Press for keeping sickle cell disease in the light,” said Smith-Whitley, the clinical director of Hematology and Director of the Comprehensive Sickle Cell Center at The Children’s Hospital of Philadelphia.

Smith-Whitley praised the Black Press for helping to shed light on the fact that one in 12 African Americans have the sickle cell trait, and the blood disorder disproportionately affects black people.

Windham also applauded the Black Press for its work.

Windham, the director of Cadillac Interior Design, and the first African American woman director in General Motors Design history said it was remarkable that the Black Press of America will celebrate 192 years.

The NNPA observes its 80th anniversary in 2020.

“Do not stop doing what you do,” she said, before encouraging others to follow her historical path.

“I owe it to the individuals that paved the way for me. I’m just an ordinary girl from Detroit,” Windham said. “If I can do it, you can do it too.”

Curry addressed attendees, applauding the Black Press and reminding the audience of the role that unions have played in America’s civil rights struggles. He also shared some of his own history as a beneficiary of benefits gained through the labor negotiation process.

An NNPA and UAW resolution reads, “Whether it was hosting Dr. Martin Luther King Jr. as he wrote his historic ‘I Have a Dream’ speech in Solidarity House, or providing bail for Dr. King’s 1963 release from Birmingham City Jail, the women and men of the UAW have and continue to play a historic role in our nation’s civil rights movement.

“I’m truly honored and humbled to be recognized with such a distinguished award,” said Hosten. “I also want to recognize the outstanding legacy of the Black Press; I grew up reading the Richmond Free Press and the Richmond Afro; they were staples in our home, around our community and in our church. Those stories told our stories, and I thank the Black Press for the continued partnership with AARP, and for 192 years of telling our story in our community which is so critical now more than ever,” Hosten said.

The awards honor individuals who are national leaders in their specific fields and whose actions have helped to improve the quality of life for African Americans and others.

The NNPA, the trade organization representing African American-owned newspapers and media companies throughout the country, began the Leadership Awards in 2014 when it was decided that the optimal time to host such an event would be during the Congressional Black Caucus Foundation’s (CBCF) Annual Legislative Conference (ALC) a week-long gathering that’s held each September.

The CBCF ALC is the largest annual gathering in the United States. The shared objective of the conference and the NNPA National Leadership Awards is to network, collaborate and strategize collectively for the advancement and empowerment of Black America.

“We salute them for the leadership they have displayed in the black community and for their overall support of the Black Press,” Richards said.

“The Black Press is needed now more than ever. We are the daily recorders of our history. We are, and forever will be, The Original Black Press of America,” Richards said.

Scott, who accepted the award for his national leadership in education, thanked Chavis and Carter-Richards for their guidance of the Black Press. “The Black Press tells news that needs to be told,” Scott said.

Bass said, “We look to [The Black Press] for news. America knows the work you do, and we look to you to help tell our story,” she said.

The ceremony also served as a reminder of the all-important 2020 Census count. Tasha Boone, a long-time public servant who now serves as a senior advisor to the Deputy Director at the U.S. Census, addressed the audience.

“We are working tirelessly with partners like the Black Press to get the word out,” Boone said. “2020 is a big year for us. It’s an election year and, just as important is the Census. In March, you will all get an opportunity to participate in the Census. Fill out the survey either online, by mail or by telephone. It’s extremely important, and it’s safe,” Boone said.