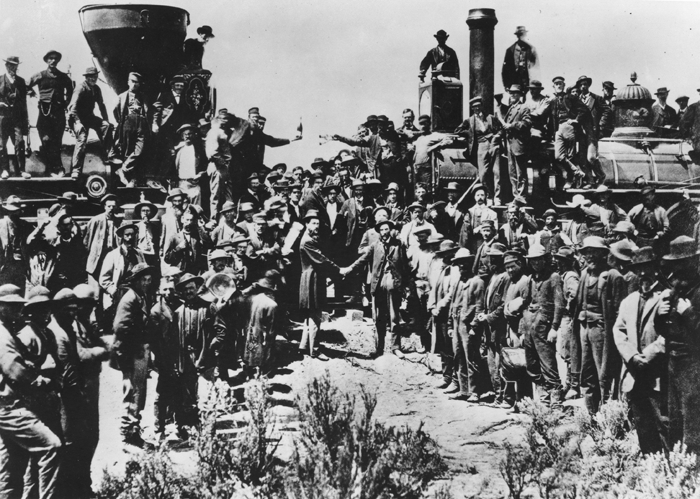 TCR 1869 official photo of the opening celebration – no Chinese workers are present.

This year marks the 150th anniversary of the completion of our nation’s Transcontinental Railroad (TCR), an engineering feat considered one of the wonders of the world. From 1863-1869 two railroad companies – the Central Pacific and the Union Pacific – were under contract to build this railroad which would connect the country from east to west. After the tracks were laid, two locomotives, coming from opposite directions, met at Promontory Point, Utah May 10, 1869, changing travel, industry and life everywhere.

Crucial to this enormous achievement were 12,000 Chinese immigrants, who comprised 90% of the Central Pacific’s workforce. It was they who laid the tracks in the West, tracks which spanned hundreds of miles of treacherous terrain over the Sierra Mountains and across the prairies. They did this backbreaking, dangerous work by hand: chiseling granite, setting the fuses to dynamite through rock, laying track. Hundreds died. Yet owing to racism, official accounts downplayed or completely omitted their vital contribution.

These men, enduring hunger, sacrificing their health, proudly gave their all to meeting a challenge to lay over 10 miles of track in one day. Their success brought honor and prize money to the railroad (not a penny of which these men ever saw) and set a record, which still stands. Disgracefully, however, the official signpost recording this stupendous accomplishment leaves them out. 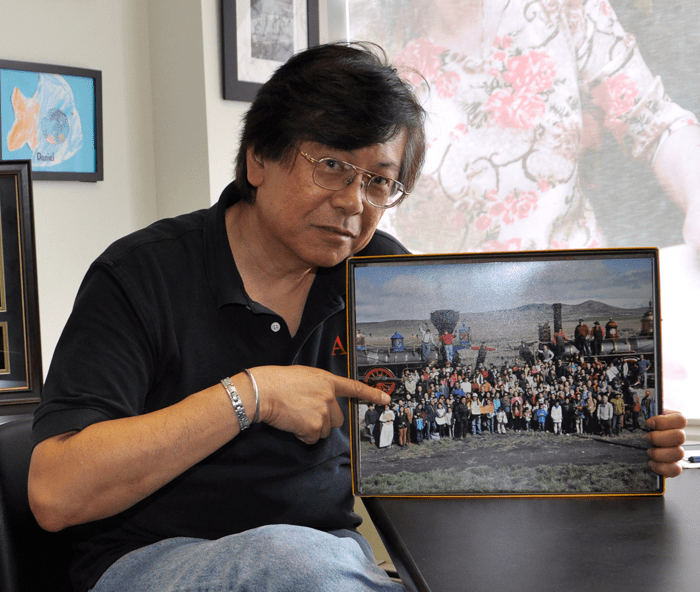 Meanwhile, I am happy to report that recently an important and respectful change is in motion to honor the Chinese railroad workers, which I will tell about soon.

I have learned that these two things – the effort now to tell the truth about history and the early shameful lying – arise from two opposing drives in every person which have been explained by Eli Siegel, founder of the education Aesthetic Realism. The first is the desire for respect which comes from our deepest desire, to like the world on an honest basis. The other is the desire for contempt: “the lessening of what is different from oneself as a means of self-increase as one sees it.”

Contempt is the cause of all injustice, including racism, war and economics based on using the work and lives of human beings for profit – something inextricably linked to the building of the railroads in America. When contempt is studied – when we oppose it wherever it is, including in ourselves – I am convinced it will be seen that there is a greater pleasure in respect: wanting to know and be fair to the world and people.

This brings me to:

Corky Lee, Photography and “The Force of Ethics”

The noted photographer/photojournalist, Corky Lee, describes himself as an ABC from NYC–an American-born Chinese from New York City. For decades, he has been documenting the history, culture, daily lives and contributions of Pan Asian Americans coming from over 40 countries – including China, Japan, Korea, the Philippines, India and Vietnam. 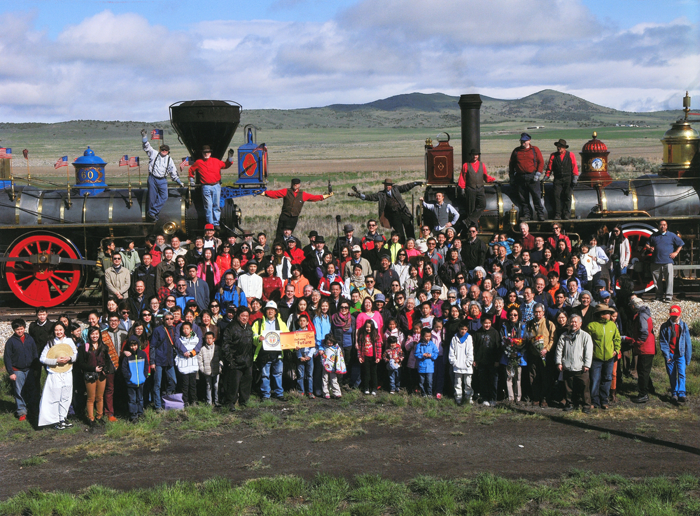 In 2015, I interviewed Lee for “The Force of Ethics in Civil Rights” Oral History Project. I gave the project this title arising from what Eli Siegel identified as the “force of ethics” working in reality and in people throughout history. The purpose of this oral history project is to learn from and gratefully acknowledge the work of unsung pioneers of all races and faiths in the struggle for justice.

Growing up, Lee was proud to learn from community elders that his ancestors built the railroad. Yet, while in junior high school in 1960, he was shocked to see in his school’s history text that no Chinese workers appeared in the official 1869 photograph celebrating the opening of the Transcontinental Railroad. Feeling certain that they must be there, he bought a magnifying glass to look more closely. The fact was – they were completely absent.

I respect Lee for the choice he then made: to use his disappointment and anger at this omission and the horrible racial prejudice it came from, not to be disillusioned but as a beginning point for seeking justice. This ethical choice led to something beautiful.

At that young age, he determined to set the record straight; to someday take a photograph that would represent history truly. He succeeded. After decades of research, he located descendants of many of the original Chinese railroad workers, and in 2014 brought them, mostly at his own expense, to Promontory Point, Utah, to the exact spot where the historically false 1869 photograph had been taken. And there, Lee took a new one, which he titled, “Photographic Justice.” Dressed in period clothing, these descendants posed for a joyful reenactment of the 1869 opening celebration of the TCR, symbolically hammering the final Golden Spike into the track. 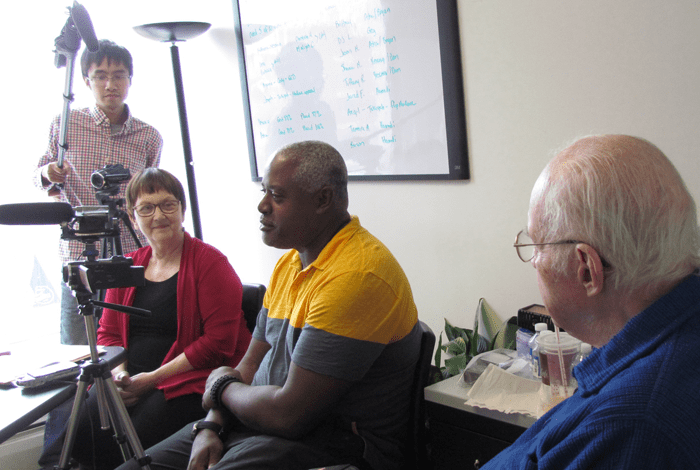 Lee’s 2014 reenactment photograph, and reports about it, spurred the growing interest in the contributions and rightful place in American history of Chinese immigrants and other marginalized workers. In 2017, the Chinese Railroad Workers Descendants Association (CRWDA) was founded to tell this story, joining with other groups representing descendants of the Irishmen, Mormons, Native Americans, enslaved and free Africans who built America’s railroads during and after the Civil War.

What began slowly became a major movement. On May 10, 2019 in Utah, thousands of people celebrated with descendants. I thought about Eli Siegel’s great definition of history, which is “shown feeling about the past” and this sentence from his comment on the definition, which I love: “The aim of history is to make past feeling felt more, or simply, the past felt more.”

Alice Bernstein, a journalist, civil rights historian, and Aesthetic Realism associate, had the honor to study with Siegel, founder of Aesthetic Realism, as she is to continue to study classes taught by Chairman of Education Ellen Reiss. 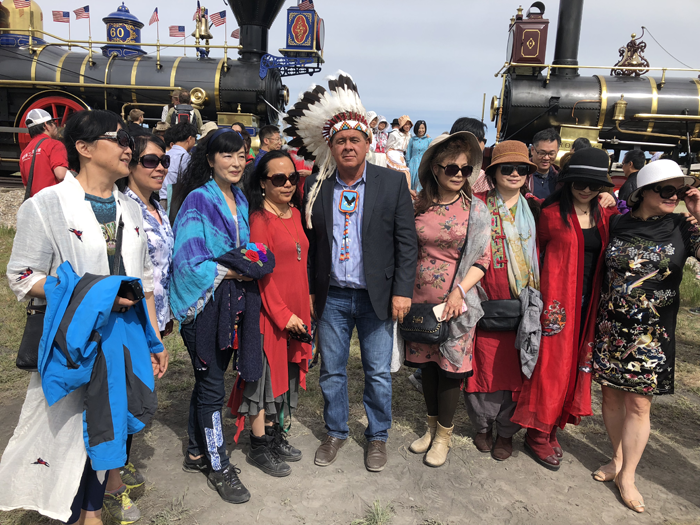 2018 Reenactment in Utah, Descendants of Asians, Native Americans, and Mormons; wearing his tribal bonnet, is Darren Parry, chairman of the Northwestern Band of the Shoshone Nation. Photo credit: Andrea Yee