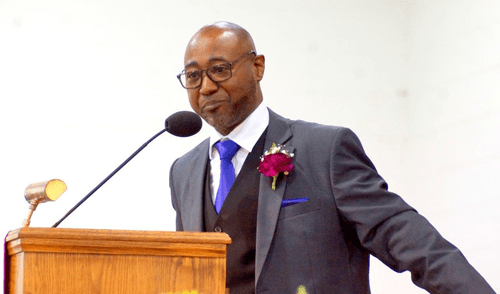 “Upon This Rock We Are Building On a Solid Foundation” was the chosen theme for the 112th year church anniversary of College Hill Baptist Church. This historical church had its humble beginnings in 1907, under an oak tree just one hundred yards from its present site.

The College Ministry, under the direction of Deaconess Daphne Higgins, gave a presentation titled “This Was Not an Ordinary Oak Tree.” Members and visitors demonstrated high praise through applause and shouts of amen as they witnessed this young group of students talk about the church’s history in a way that had not been shared.

They [College Ministry] told the church of how this oak tree was not an ordinary one. It was described as a tree that had strong branches which provided shade in the heat of the summer, shelter from the rain and served as a gathering place for their ancestors to talk about the Lord.

The oak tree was the meeting place where six ministers and two laymen met to organize College Hill on land which was provided by then Jackson College, as a gift to the community for worship. Now known as Jackson State University and College Hill have a longstanding relationship which goes back to when the oak tree stood tall and offered hope to the community.

The ministry received high applause when they ended their presentation stating this was no ordinary oak tree and College Hill is no ordinary congregation, at which time music director Brandon Mitchell burst into singing “Father Help Your Children and Don’t Let Them Fall by the Side of the Road.”

Pastor Michael T. Williams described the presentation by the College Ministry as a tremendous masterpiece that was powerful and persuasive.

Stafford brought worshippers to their feet throughout his message as he reminded members that God had been good to College Hill and shown them favor for over 112 years. He reminded worshippers that they cannot lock anybody out of the church regardless of their lifestyles or their sins, which may be different from churchgoers’ sins. Stafford said, “God loves everybody.” He reminded the church family that everyone needs the same repentance and the same Christ and no one should feel locked out of the church. He said some people possessing keys should not have them and some being locked out should be given keys.

As Stafford ended his sermon he said, “God wants you to go past the oak tree, go down into the college, high school, middle school and below and help children become what they can become.” He said the children need College Hill every day, not just on Sunday. Before taking his seat Stafford said, “we have to remain firm in fighting the good fight” and worshippers stood to their feet with thunderous applause.

Williams thanked Stafford for such a great and powerful message. He thanked the anniversary committee and participants for their very significant contributions to the anniversary service.

Deacon Reginald Knight presided over the service with music being provided by the College Hill mass choir under the  direction of Brandon Mitchell.

College Hill is looking forward to celebrating its 113th year church anniversary upon completion of their new edifice which is currently under construction.