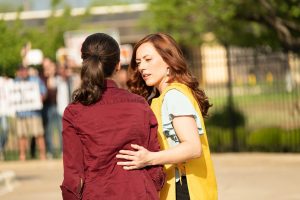 Abby Johnson (Ashley Bratcher) was recruited by Planned Parenthood to do volunteer work when she was still an undergrad at Texas A&M. Her first job was to escort women seeking abortions from the parking lot into the building, past picketers calling them baby killers.

Upon graduating from college, she was hired as a counselor at the controversial, reproductive health services provider’s clinic in Bryan, Texas. Over the course of the next eight years, she rose up the ranks to office director, even though she was privately conflicted over whether the organization’s primary function was to inform pregnant women about their options or merely to perform abortions.

After all, she not only came from a conservative, pro-life family, but felt overwhelming regret about the two abortions she had undergone herself earlier in life. So, between pressure from her parents and the almost daily confrontations with demonstrators, Abby’s conscience began to get the better of her.

The moment of truth arrived the day her help was urgently needed in the operating room. And, for the first time in her career, she observed an actual abortion.

She was shocked by the gruesome procedure which left her convinced that the fetus was a baby. In fact, she felt so guilty that she decided to resign and join the pro-life protesters marching outside the building.

That is the touching transformation convincingly conveyed in Unplanned, a poignant, cinematic portrait co-directed by Chuck Konzelman and Cary Solomon. Unfortunately, abortion is such an incendiary issue, this is the sort of film audiences will be inclined to judge without seeing based on their political persuasion, although it’s adapted from Abby Johnson’s very personal memoir.

To see a trailer for Unplanned, visit: https://www.youtube.com/watch?v=gBLWpKbC3ww

Life of the Party

Film Review by Kam Williams   Just-Dumped Divorcee’ Returns to College in Bawdy, Midlife Crisis Comedy Deanna Miles (Melissa McCarthy) was a junior in college when she got pregnant and dropped out of school to […]