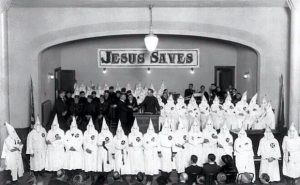 “Despite dramatic social transformations in the United States during the last 150 years, the South has remained staunchly conservative. Southerners are more likely to support Republican candidates, gun rights, and the death penalty, and southern whites harbor higher levels of racial resentment than whites in other parts of the country.

Why haven’t these sentiments evolved or changed? “Deep Roots” shows that the entrenched political and racial views of contemporary white southerners are a direct consequence of the region’s slaveholding history, which continues to shape economic, political, and social spheres. Today, southern whites who live in areas once reliant on slavery—compared to areas that were not—are more racially hostile and less amenable to policies that could promote black progress.”

Excerpted from the dust jacket

William Faulkner is the only Nobel prize-winner born in Mississippi, which is where most of his stories are set. One of this preeminent Southern writer’s most memorable lines is, “The past is never dead. It’s not even past.”

Over the course of the 150+ years since Emancipation, the descendants of slave owners have continuously operated to prevent blacks from pursuing the American Dream. In the face of the 13th, 14th and 15th Amendments, southern municipalities, cities and states passed Jim Crow laws denying African-Americans the right to vote, travel, buy land, possess a gun, get an education, and so forth.

The punishment for even the slightest of infractions ranged from whipping to lynching in order to strictly maintain the region’s color-coded caste system. “Racial violence was an important component of the development of anti-black attitudes, even among poor whites.” Furthermore, “White children were often present… and, in some striking cases, they were also active participants.”

So, is it any surprise that, “As of the 2016 election, all of the former states of the Confederacy had implemented some voter identification law” in an effort to deny as many black citizens as possible access to the ballot box? Advocates of Confederate monuments and memorials continue to claim the Civil War was waged over states’ rights, conveniently ignoring the assertion of the designer of the rebel battle flag that, “As a people, we are fighting to maintain the heaven-ordained supremacy of the white man over the inferior or colored race.”

A timely tome which explains why, from neo-Nazis marching in Charlottesville to Virginia politicians donning blackface, when it comes to the South, the more things change, the more they remain insane.