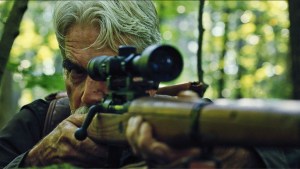 Every now and then, a film turns history on its head. For example, Abraham Lincoln: Vampire Hunter made over $100 million dollars at the box office by suggesting that the 16th President of the United States was also a legendary stalker of the undead. And Quentin Tarantino’s Inglourious Basterds, which had Hitler dying in a movie theater fire rather than by committing suicide, made three times as much money.

Playing fast and loose with the truth can be pretty profitable in other arenas as well. Donald Trump sealed the Republican presidential nomination by parroting the National Enquirer’s patently ridiculous assertion that JFK assassin Lee Harvey Oswald hadn’t acted alone but with the help of Senator Ted Cruz’s father, Rafael.

Well, in The Man Who Killed Hitler and Then The Bigfoot we have a film that contradicts conventional wisdom not once, but twice. The picture stars Sam Elliott as Calvin Barr, the World War II vet who supposedly successfully assassinated the Fuhrer on a top secret mission.

This picture unfolds decades later when an aging Calvin is coaxed out of retirement by an FBI agent (Ron Livingston) to track down the legendary Bigfoot (Mark Steger) that is rumored to be living deep in the Canadian forest. It seems that the mythical beast is responsible for a deadly plague that is threatening to decimate the population.

Turning down an array of 007-level, state of the arts gadgets, Calvin stoically sets out with just a rifle, a scope and a Bowie knife. He doesn’t even don goggles, gas mask and a protective suit to prevent his prey from infecting him. Sam Elliott plays it straight, here, but you can’t help but wonder whether the veteran thespian’s embarrassed by the fact that this campy B-flick has been released right when he’s been nominated for an Oscar for the first time in his career.

An amusing mix of fantasy and revisionist history bordering on cheesy that’s strictly for the very gullible!

To see a trailer for The Man Who Killed Hitler and Then The Bigfoot, visit: https://www.youtube.com/watch?v=UkP4bZKCHE8