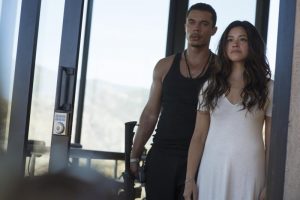 Gloria (Gina Rodriguez) is a Hollywood makeup artist sorely in need of a break from her abusive boss. The straw that broke the camel’s back came the day he condescendingly responded to her resourcefulness with the insulting, “Honey, we’re not paying you to think.”

So, on her way out the door, Gloria stole a couple of bags of cosmetics for her lifelong friend, Suzu (Cristina Rodlo), who is about to enter the Miss Baja beauty contest. Suzu still lives south of the border in their hometown of Tijuana with her little brother, Chava (Sebastian Cano).

Not long after arriving, the BFFs head out to a disco to attend a party sponsored by the pageant. But the two are soon separated when a gunfight breaks out between the police and La Estrella, a drug cartel led by the bloodthirsty Lino Esperanza (Ismael Cruz Cordova).

Gloria ends up in the maniacal mobster’s clutches, and is unwittingly duped into blowing up a DEA safe house with three agents inside. She’s subsequently apprehended by Agent Brian Reich (Matt Lauria) who doesn’t believe a word of her improbable alibi.

He forces Gloria to prove her innocence by infiltrating Lino’s gang in order to help the U.S. government bring down the vicious crime syndicate. Of course, that’s easier said than done since she’s a beautician unschooled in undercover detective work.

That’s the captivating premise established at the outset of Miss Bala, a frenetically-paced remake of the 2011 Mexican action thriller of the same name. The film was directed by Catherine Hardwicke whose adaptation of Stephenie Meyer’s vampire romance novel Twilight netted around $400 million at the box office.

Here, Hardwicke has crafted a compelling cross of Taken (2008) and Miss Congeniality (2000). The movie’s relentless sense of urgency is reminiscent of the former, while the protagonist’s grudging participation in a beauty pageant is similar to Sandra Bullock’s fish-out-of-water performance in the latter.

In English and Spanish with subtitles

To see a trailer for Miss Bala, visit: https://www.youtube.com/watch?v=MaI-4NepPfU

Film Review by Kam Williams   Jessica Chastain Plays Skier-Turned-Felon in Warts-and-All Biopic Molly Bloom (Jessica Chastain) was the third-ranked downhill skier in North America when her dream of representing the U.S. in the 2002 […]