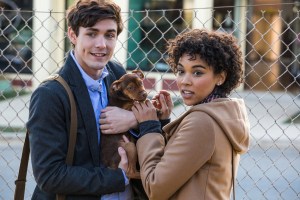 Life has proven to be quite a challenge for Bella (voiced by Bryce Dallas Howard) from the start. Soon after birth, the puppy was separated from her mother, though she was lucky enough to be nursed back to health by a stray cat.

The lovable mutt eventually lands at an animal shelter where receptionist Olivia (Alexandra Shipp) introduces it to the cute volunteer (Jonah Hauer-King) she has a crush on. Lucas decides to adopt Bella, hoping she might help lift the spirits of his mom (Ashley Judd), a military veteran suffering from PTSD.

Terri does take to the playful pooch, although she is subsequently threatened with eviction for violating her lease’s “no pets” provision. A further complication arrives when Denver’s dogcatcher (John Cassini) incorrectly labels mixed-breed Bella as a pit bull. He warns that a local ordinance allows him to euthanize any pit bull not on a leash in public.

The plot thickens the day Bella impulsively leaps through a window to chase a squirrel down the street. She’s spotted and seized by Officer Chuck who is eager to put her to sleep.

But the hound’s life is spared thanks to a compromise whereby Bella is shipped to New Mexico to live with Olivia’s Uncle Jose (Darcy Laurie).

Unfortunately, Bella is miserable without Lucas and Terri, and it’s not long before she runs away, embarking on a 400-mile journey home. That very eventful odyssey, marked by love, altruism, loyalty, unlikely liaisons, close brushes with death and even a terrible tragedy (which might upset tykes), fuels the fire of A Dog’s Way Home, a touching tale directed by Charles Martin Smith (Air Bud).

The movie is based on the novel of the same name by W. Bruce Cameron whose best seller, “A Dog’s Purpose,” was successfully adapted to the screen a couple of years ago. Though not technically a sequel, this is another inspirational adventure narrated by an anthropomorphic canine.

The sentimental storyline is designed to appeal to dog lovers of all ages. Don’t be surprised if you just can’t resist the transparent attempts to tug on your heartstrings, despite the fact that this is a flick which telegraphs it punches.

Fairly formulaic, but it works!

To see a trailer for A Dog’s Way Home, visit: https://www.youtube.com/watch?v=1pKdCHvH310