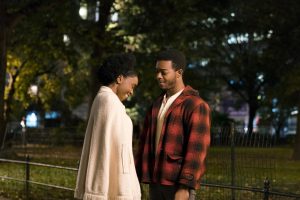 In 1974, James Baldwin published “If Beale Street Could Talk,” a love story, set in Harlem, about a beleaguered black couple’s pursuit of the elusive American Dream. Many critics consider the heartrending novel Baldwin’s best work, perhaps because of the way in which it humanizes an array of African-American characters ordinarily marginalized and relegated to the shadows of society.

At the point of departure, the star-crossed lovers are already behind the proverbial 8 Ball. Narrator Tish informs us that her beau, an aspiring sculptor, has recently been arrested for rape. Then, during a jailhouse visit, she lets him know through the frustrating glass partition that he’s going to be a father.

Fonny takes the news of the pregnancy in stride, which is more than can be said for his family, especially his disapproving mother (Aunjanue Ellis) and sisters (Dominique Thorn and Ebony Obsidian). Fortunately, Tish’s feisty mom, Sharon (Regina King), is up to the challenge of getting everybody to stop pointing fingers self-righteously in favor of focusing on the blessing of a baby that’s coming.

Meanwhile, Fonny’s impending trial looms large. For, despite an airtight alibi, he was ostensibly framed by a racist cop (Ed Skrein) capable of cavalierly framing a black man for a crime he didn’t commit.

Hope for justice rests with getting the alleged rape victim (Emily Rios) who fingered Fonny at the direction of Officer Bell to tell the truth. But she’s moved to Puerto Rico, making the prospect of her recanting in court unlikely, unless Sharon is willing to go to extraordinary lengths in quest of exoneration.

All of the above unfolds in fascinating fashion against a variety of visually-captivating backdrops. Kudos to Barry Jenkins for crafting another compelling inner-city saga, and especially for coaxing a career performance out of Regina King, a shoo-in for an Oscar nomination.

Rated R for profanity and sexuality

To see a trailer for If Beale Street Could Talk, visit: https://www.youtube.com/watch?v=N4m3t3G3Zqc

Thank You for Your Service

Film Review by Kam Williams   Wounded Warriors Readjust to Civilian Life in Adaptation of Heartbreaking Best Seller In the spring of 2007, the Washington Post’s David Finkel accompanied a combat team of American infantrymen […]

The Gospel According to André

May 8, 2015 Online Editor Entertainment Comments Off on Race-Fueled Courtroom Drama Comes to DVD