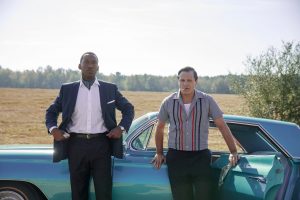 Don Shirley (Mahershala Ali) was a promising prodigy whose formal training in classical piano began when he was admitted to Russia’s prestigious Leningrad Conservatory at the age of 9. Because he had the misfortune of being raised in Florida in the Jim Crow Era, it was very unlikely that his extraordinary talent would be appreciated anywhere in the South upon his return to the States.

The North was decidedly different. While still in his teens, Don was invited by conductor Arthur Fielder to perform with the Boston Pops Orchestra. He would later compose symphonies for the New York Philharmonic and was even allowed to rent an apartment above Carnegie Hall.

In the early Sixties, Don decided to throw caution to the wind by embarking on an eight-week concert tour across the Deep South. This would involve playing numerous “white only” venues where, despite being the headliner, he might not be able to dine or use the restroom.

As far as finding a place to stay, he would turn to the Green Book, a priceless guide for African-Americans in need of public accommodations across the segregated South. And to make sure he kept out of trouble on the road, he hired Tony Lip Vallelonga (Viggo Mortensen), a blue-collar bouncer from the Bronx.

Thus unfolds Green Book, a fact-based buddy flick revisiting the unlikely friendship forged between a stuffy classical artist and his rough-edged driver in the face of their racial and class differences. The movie represents a bit of a departure for director Peter Farrelly, whose name has long been associated with lowbrow comedies like Dumb and Dumber, Shallow Hal and There’s Something about Mary.

The relatively-sophisticated Green Book proves to be far more reminiscent of Driving Miss Daisy (1989) than of Farrelly’s earlier bottom-feeding fare. In fact, the palpable chemistry generated by co-stars Mahershala Ali and Viggo Mortensen will not be forgotten by the Academy come Oscar season.

A touching biopic with a timely universal message about brotherhood and tolerance.

To see a trailer for Green Book, visit: https://www.youtube.com/watch?v=QkZxoko_HC0