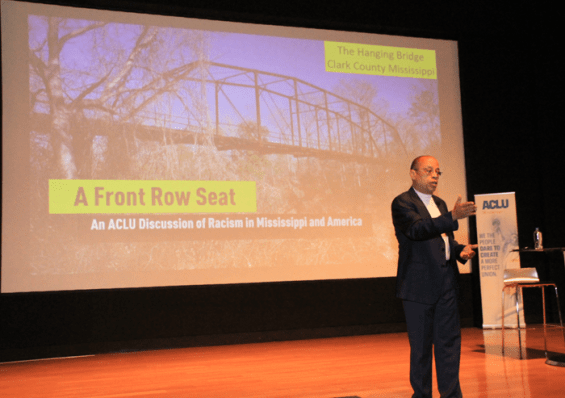 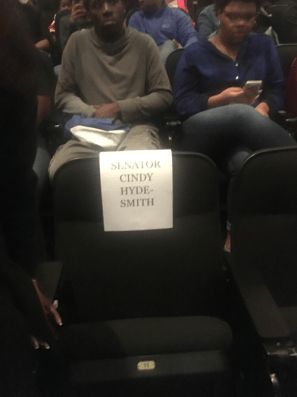 Against the backdrop of racially charged comments made by interim U.S. Senator Cindy Hyde-Smith, Jeff Robinson, deputy legal director at the American Civil Liberties Union (ACLU), lead a conversation on the history of racism in Mississippi and America Monday, November 19, at the Jackson Convention Complex Theatre.

The ACLU of Mississippi produced this real life history lesson, titled “A Front Row Seat.” It offered insight into the state’s history of slavery, slave patrols, lynchings, black codes, Jim Crow and modern-day mass incarceration. The conversation was held the night before the only debate between candidates for U.S. Senate in the special runoff election.

The event took audience members through a historic exploration of racial terrorism on a local and national level.

Playing off Hyde-Smith’s racially charged comments, the ACLU of Mississippi saved her a front row seat at this conversation and periodically, Robinson deferred to the empty seat. Though her seat was empty, hundreds of people filled the seats around hers.

“You may have noticed that there is a reserved seat in the front row; we cordially invited sitting Senator Cindy Hyde-Smith, as we believed that this could be a moment of education and opportunity for a dually appointed U.S. Senator to show sincere regret,” Jennifer Riley Collins, executive director of the ACLU of Mississippi, told a crowd of people. We believe that Mississippi is much better than those statements, but unfortunately Mississippi is suffering from some policies, that were built, that have institutionalized racism in Mississippi.”

One of the most poignant moments of the evening was when Robinson showed a video with African Americans singing the third stanza of the National Athem with their hands over their hearts. The Mississippi Link will  explore this part of the conversation next week.

Mississippians will return to the polls Tuesday.