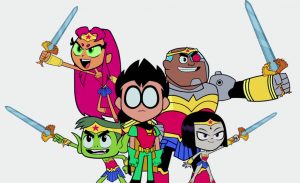 Created by DC Comics back in 1964 to serve as sidekicks to members of the legendary Justice League, the Teen Titans is a talented team of superheroes in its own right. The motley crew underwent numerous personnel changes over the years before finally settling down as the five young crime-fighters appearing in the popular Cartoon Network TV series since 2003.

The animated adventure revolves around the Titans’ desire to star in their own summer blockbuster, like other characters in the DC Universe. Trouble is they’re not being taken seriously by Jade Wilson (Kristen Bell), Hollywood’s hottest director.

She’ll only consider shooting the film if all of the members of the Justice League are suddenly unavailable to save the planet from a diabolical supervillain. As luck would have it, that’s just what transpires when they fall under the spell of mind-controlling Slade (Will Arnett), the proverbial madman bent on world domination.

Not to worry. The Teen Titans come to the rescue, and what ensues is a dizzying mix of slapstick humor, madcap action and musical numbers. Along the way, discerning adults are also apt to notice some clever allusions as well as the distinctive voicework of Jimmy Kimmel as Batman, Nicolas Cage as Superman, and James Corden as Balloon Man.

An irreverent spoof of the superhero genre that’s certain to delight the whole family!

To see the trailer for Teen Titans Go! To the Movies, visit: https://www.youtube.com/watch?v=r9WhJyyTtqo