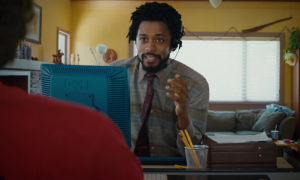 To describe Cassius Green (Lakeith Stanfied) as struggling would be a major understatement. He and his girlfriend Detroit (Tessa Thompson) are four months behind in their rent on an unfinished garage apartment in inner-city Oakland. The only reason they haven’t been evicted is that their landlord is Cash’s compassionate Uncle Sergio (Terry Crews). He’s been willing to wait to be paid, and even gave his nephew a car for free.

Cash has been unemployed, but it isn’t for a lack of trying. His luck changes when, despite being caught lying on his resume’ during a job interview, he’s hired anyway because the interviewer admired his ingenuity. The hope is that he’d bring the same ambition to his entry level gig as a telemarketer.

It’s impressed upon Cash during his training to “Stick to the Script,” if he wants to succeed. Plus, he gets a valuable tip from an African-American colleague (Danny Glover) in the neighboring cubicle, namely, “Use your white voice.”

Between dropping his black accent and following the company’s guidelines, Cash earns a coveted promotion to powercaller. Suddenly, he’s making enough money to pay off Uncle Sergio, buy a new car and move into a fancy flat in an upscale neighborhood.

Unfortunately, the raise proves to be a mixed blessing for Cash. First, it creates tension between him and the buddies he left behind on the floor of the crowded call center, since they’re still making minimum wage and are in the midst of organizing a union over the objections of management. And then his politically-active, performance artist girlfriend is disappointed when he crosses the picket line and dubs him a “scab.”

Thus unfolds Sorry to Bother You, a thought-provoking social satire marking the scriptwriting and directorial debut of Boots Riley. If the name rings a bell, that’s because he’s better known as the founder of the radical, hip hop group, The Coup, as well as one of the most dynamic leaders of the Occupy Oakland Movement kickstarted back in 2011.

The film certainly reflects Boots’ far left leanings, but is clever and entertaining enough to recommend even to members of the 1%.

To see the trailer for Sorry to Bother You, visit: https://www.youtube.com/watch?v=enH3xA4mYcY

From Trayvon Martin to Michael Brown to Tamir Rice