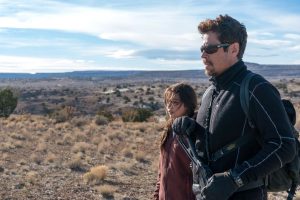 I can’t think of a movie that has ever been more timely. Just as the debate about the detention of undocumented aliens has reached a fevered pitch, here we have a film revolving around the dark side of the border wars.

It doesn’t focus as much on the vast majority of non-violent refugees entering the country in search of the American Dream as on the “bad hombres” Donald Trump has repeatedly alluded to since the day he threw his hat into the ring as a presidential candidate. Although the film is technically a sequel, one need not have seen the original to enjoy this heart-pounding adventure.

As the film unfolds, we find the two being dispatched to Mexico by the Secretary of Defense (Matthew Modine) to smoke out the human traffickers smuggling radical Islamists into the U.S. There’s an urgency to their mission, given that some suicide bombers embedded with Latinos seeking asylum recently snuck across the Rio Grande before blowing themselves up in a big box store in Kansas City.

Trouble is, there are too Mexican gangs and too little time to sort out which one has started exporting terrorist cells. So, instead of searching for the guilty parties, our heroes secretly kidnap the daughter of a crime boss hoping that her mysterious disappearance will trigger a bloody turf war among the cartels competing for control of the region.

There is a method to the madness behind abducting Isabela Reyes (Isabela Moner). After all, her father is the ruthless kingpin who ordered the massacre of Gillick’s family in Sicario 1.

The ruse works for awhile, but the plot thickens when the Mexican government catches wind of the spies’ scheme. The U.S. disavows any connection to them, a la Mission: Impossible, and suddenly it’s each man for himself in a harrowing struggle to escape back to the States by any means necessary.

A riveting, rough-edged, political thriller not to be missed!

In English and Spanish with subtitles

To see a trailer for Sicario: Day of the Soldado, visit: https://www.youtube.com/watch?v=sIMChzE_aCo