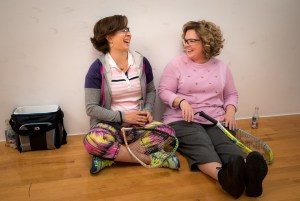 Deanna Miles (Melissa McCarthy) was a junior in college when she got pregnant and dropped out of school to have the baby. She married her boyfriend, Dan (Matt Walsh), who finished his degree and kickstarted his career while she remained a stay-at-home mom.

Fast forward to the present and we find the couple dropping now-grown Maddie (Molly Gordon) off at their alma mater, Decatur University, where she’s about to begin her senior year. She’s happy to be moving back in with her girlfriends living at Theta Mu Gamma sorority house.

On the drive home, Dan drops a bombshell on Deanna. He’s canceled their planned, month-long vacation in Italy in favor of filing for divorce. Furthermore, the callous creep wants her out of the house, since it’s in his name alone.

To add insult to injury, he’s putting it on the market with the help of his mistress Marcie (Julie Bowen), a realtor in town. And he has the temerity to rub salt into his shocked wife’s wounds by explaining the ongoing affair with, “I just needed an upgrade.”

That cruel behavior frees Deanna to put some of his favorite belongings in a pile and set them on fire. Still, she’s left in a quandary about what to do next, not having worked and or even graduated from college.

Then she comes up with the bright idea of returning to Decatur to do her senior year right along with her daughter. Too bad Molly’s mortified about the prospect of having her mom on campus.

But that is precisely the premise of Life of the Party, a midlife crisis comedy directed by Ben Falcone and co-written by Ben and his real-life wife, Melissa McCarthy. The movie marks the couple’s third and most successful collaboration, following the less funny Tammy (2014) and The Boss (2016). This offering is most reminiscent of Back to School (1986), the Rodney Dangerfield classic about a dad who decides to matriculate at the same college as his son.

While Melissa McCarthy has undeniably been hilarious in buddy flicks and as part of an ensemble, a la Bridesmaids (2011), The Heat (2013) and Ghostbusters (2016), she remains yet to prove an ability to maintain that level of laughter carrying a star vehicle. That being said, this female-centric variation on Back to School is well worth the investment.

Rated PG-13 for sexuality, partying and drug use

To see a trailer for Life of the Party, visit: https://www.youtube.com/watch?v=YTyfkQrr6M4