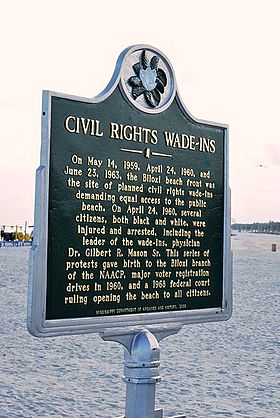 BILOXI, Miss. (AP) – Mississippi is memorializing the site of a protest that led to the racial integration of the state’s public beaches.

Officials on Tuesday dedicated a marker noting the site of the Biloxi beach wade-ins. African Americans protested on the shore of the Mississippi Sound in 1959 and 1960, seeking to use 26 miles of beaches in Harrison County that had been reserved for whites only.

Dr. Gilbert Mason and the Harrison County Civic Action Committee led the protests, including one on April 24, 1960 when 125 nonviolent demonstrators were assaulted by a mob of white opponents. Riots followed, resulting in the deaths of two African-American men.

The beaches weren’t integrated until August 1968

The state is erecting markers to Civil Rights sites across Mississippi as part of its Freedom Trail.

(AP) A grand jury has ruled three Mississippi police officers were justified in the fatal shooting of a 37-year-old man whose weapon turned out to be a BB gun. Biloxi Police Chief John Miller said […]

By Judy Willis  Contributing Writer Medicine is the focus of part three of this series. Dr. Myrna Ellen Alexander Nickens, associate professor of medicine at the University of Mississippi Medical Center, is featured. She has […]