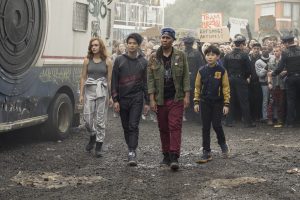 It is 2045, a time when the planet has devolved into a desolate dystopia marked by a combination of pollution, overpopulation, poverty, corruption and global warming. Most of humanity lives in slums where they escape the misery by disappearing via virtual reality into the Oasis, a popular parallel universe co-created by James Halliday (Mark Rylance) and Ogden Morrow (Simon Pegg).

The characters were ostensibly inspired by Apple co-founders Steve Jobs and Steve Wozniak, since the former seized the reins of the company after the latter sold his stock citing concerns about its direction. Here, we have Halliday in control of Oasis and a skeptical Morrow no longer associated with the firm.

The picture’s point of departure is an unrecognizable Columbus, Ohio, a now devastated metropolis whose skyline has been reduced to a vast wasteland of vertical “stacks,” mobile homes piled high atop one another. That’s where we find Wade Watts (Tye Sheridan), an orphaned teen taken in by his Aunt Alice (Susan Lynch).

Wade’s a gamer who goes by the avatar Parzival whenever he’s online. His best friend is Aech (Lena Waithe), though they’ve never actually met. That’s apparently par for the course, since everyone prefers escaping into the Oasis to facing the post-apocalyptic squalor that is reality.

A glimmer of hope arrives in the will left behind by the recently-deceased Halliday. By way of video, he announces a treasure hunt for an Easter egg hidden in the Oasis. The finder will not only be awarded control of his company, but stands to inherit half a trillion dollars to boot.

So, Wade forms the High Five, a rag-tag team composed of him, Aech, Art3mis (Olivia Cooke) and geeky siblings Sho (Philip Zhao) and Daito (Win Morisaki). Sure, millions of other “Gunters” (egg hunters) join in the search, but their chief competition is Innovative Online Industries (IOI), a video game conglomerate run by the maniacal Nolan Sorrento (Ben Mendelsohn). Given the mammoth army of indentured players at his disposal, it’s hard to see how the High Five might prevail.

Not to worry. You can always trust Steven Spielberg to work his movie magic. And, after establishing that implausible premise, Ready Player One takes off at a dizzying pace, with the legendary director even carving out space for a little romance.

You see, Wade has a big cyber crush on Art3mis, even though he has no idea what she looks like in real life. She likes him, too, but hides behind her avatar, because of a big birthmark on her face.

Will sparks continue to fly when they finally cross paths in the flesh? Can the High Five find the Easter egg first? Far be it from me to spoil this thrill-a-minute, virtual reality roller coaster ride riddled with allusions to pop culture and classic computer games.

To see the trailer for Ready Player One, visit: https://www.youtube.com/watch?v=cSp1dM2Vj48

When They Call You a Terrorist

by Kam Williams   Who Will Win, Who Deserves to Win, Who Was Snubbed If you’re planning on entering an Oscar pool at the office or online, you might want to check out my pix […]