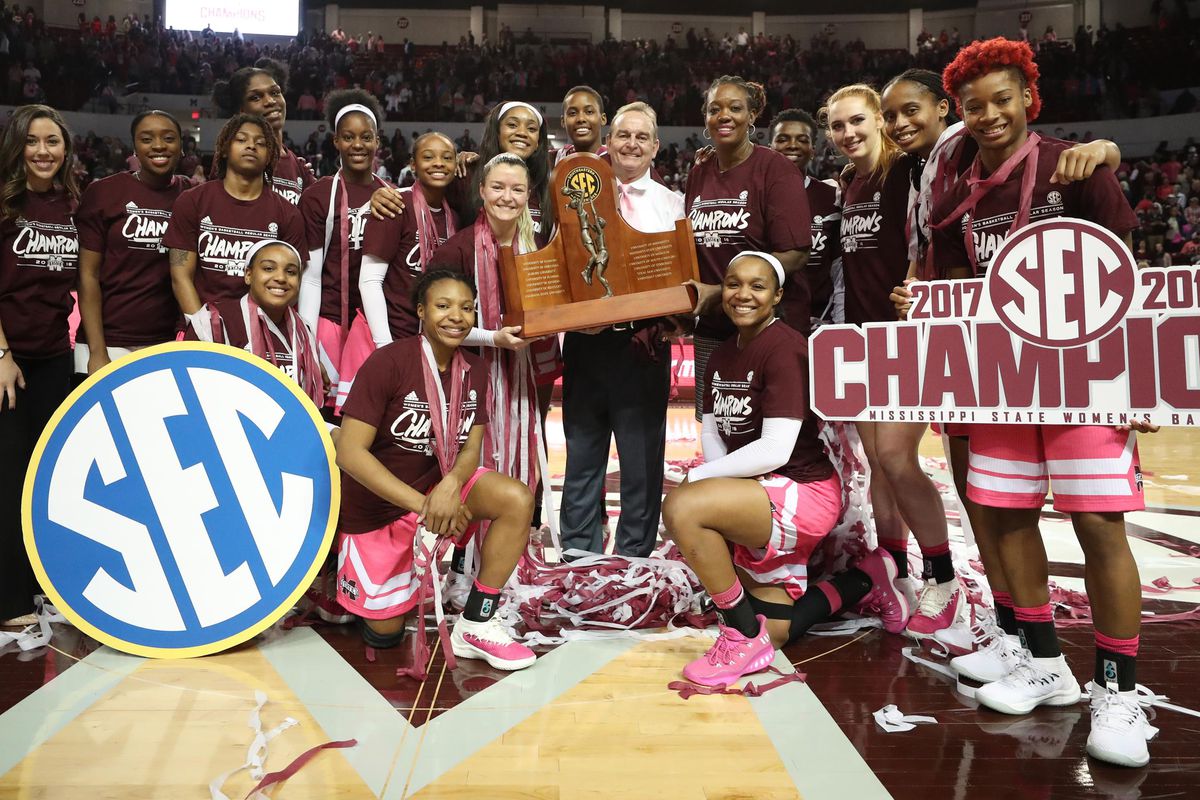 NEW YORK (AP) — UConn is back in a familiar place — the No. 1 overall seed in the women’s basketball NCAA Tournament.

Joining the Huskies as top seeds are Notre Dame, Louisville and Mississippi State.

The Huskies enter as the lone unbeaten team and will be vying for their 12th national championship. It’s the ninth time that UConn has entered the NCAAs undefeated, including last year when the Huskies went in as the overwhelming favorite before their 111-game winning streak ended with a loss to Mississippi State in the Final Four.

This year’s Final Four is in Columbus, Ohio, and will take place on March 30. The national championship game is on Sunday, April 1.

Defending national champion South Carolina and A’ja Wilson await as a possible Elite Eight matchup for UConn in the Albany Regional. The Gamecocks are the two-seed.

“What can you do? You have to beat some pretty good teams. Is it an impossible feat? Obviously not,” South Carolina coach Dawn Staley said. “We saw that last year. If we’re in the position where we have to play them, we’re going to play them. We’re going to give it our best shot and let the chips fall where they may.”

The Gamecocks lost by 25 at home against UConn on Feb. 1.

Florida State and Georgia are the other top seeds in the Huskies’ part of the bracket.

“Brackets are brackets. There are good teams in every bracket,” UConn coach Geno Auriemma said. “There are great matchups in every bracket and it doesn’t really matter at this stage where you’re placed, what region, you’re going to have to beat some really good teams. The schedule we play, I knew we’d get somebody two or three that we already played. We know that.”

UConn, which has been a No. 1 seed every year since 2007, opens up against 16-seed Saint Francis (Pennsylvania) on Saturday morning. All of the top four teams in each region host the opening two rounds at home.

Like the Huskies, the Irish are a No. 1 seed again. Notre Dame has been a top seed the last seven years. This might be one of coach Muffet McGraw’s finest accomplishments as Notre Dame lost four pivotal players to injury, but only three games on the season. Two of those losses came to Louisville.

The Irish are in the Spokane Regional and open up against Cal State Northridge on Friday. If Notre Dame advances, the Irish would head out west to potentially face No. 2 seed Oregon.

“We’ve never been in the West bracket. I love playing Friday at 5. That’s awesome,” McGraw said.

The Ducks could stay out west and play in Spokane, where coach Kelly Graves spent many years as Gonzaga’s coach. Ohio State and Texas A&M are the three and four seeds in that region.

Louisville won the Atlantic Coast Conference for the first time this season. The Cardinals open up against Boise State and are one of eight ACC teams in the field. The Southeastern Conference has seven teams in the tournament, while the Pac-12 and the Big Ten have six.

“We’re really excited about the opportunity,” Louisville coach Jeff Walz said. “We’re excited to host the first two at home against two very good basketball teams. If we’re fortunate enough to advance, we get the opportunity to play in Lexington, which would be great for our fans.”

The Lexington Regional is stacked with former NCAA Tournament winners with Baylor the two-seed, Tennessee the three and Stanford the four. While the Lady Vols have been in the NCAA Tournament every year since it began in 1982, Nicholls State, Northern Colorado, Mercer and Seattle will be making their first appearances.

Stanford potentially is headed to Lexington for the third straight year if it can advance.

Mississippi State is a No. 1 seed for the first time in school history. The Bulldogs won their first 32 games this season before losing to South Carolina in the SEC title game. With most of their players back from last season’s runner-up finish — including Morgan Williams, who hit the game-winner in overtime to knock off UConn — the Bulldogs hope to make another deep NCAA run.

The NCAA revealed Sunday night the final eight teams under consideration for the last four spots in the tournament. Buffalo, Creighton, Minnesota and Oklahoma got in. Purdue, Rutgers, Southern Cal and West Virginia were the first four teams out.

“We spent almost seven hours on that decision of who those last four teams in and first four out were,” NCAA women’s basketball committee chair Rhonda Bennett said. “We went through those resumes and their body of work. We took as long as it took to get those teams into the bracket.”

Bennett said Oklahoma’s strength of schedule, which was second best in the country, was a key to its selection.

A complete overhaul has rendered Mississippi State’s basketball program barely recognizable from a year ago.

Longtime coach Rick Stansbury is gone. So are all five starters and a big chunk of the bench production. […]