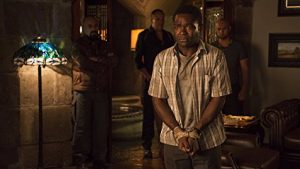 Nerdy Harold Soyinka (David Oyelowo) is a loyal employee at Promethium Pharmaceuticals who has been patiently waiting for his chance to share in the success from its lucrative sales of medical marijuana in pill form. Unfortunately, the naive Nigerian immigrant is unaware that the Chicago-based company’s CEO, Richard Rusk (Joel Edgerton), has no intention of ever giving him a cut in the profits.

Instead, Richard just fills his head with promises of a lavish lifestyle like he’s seen on rap videos. Furthermore, Harold also has no idea that his backstabbing boss is having an affair with his wife, Bonnie (Thandie Newton). Further complicating matters is the fact that Richard is in a committed relationship with his business partner, Elaine (Charlize Theron).

The plot thickens when Harold has to fly with them to Mexico to supposedly set up a factory. Truth be told, the real purpose of the trip is to break off relations with a powerful drug cartel run by the ruthless Juan Miguel Villegas (Carlos Corona).

You see, Richard wants to go legit and stop selling pills on the black market. Of course, Villegas is unhappy with this development, so it isn’t long before all hell breaks loose. When the dust settles, Richard and Elaine make a break for the States while we find Harold calling company headquarters to say he’s been kidnapped and being held for a $5 million ransom.

Regrettably, the film’s intriguing premise gives way to an overplotted adventure with far too many characters and sidebars. Are we supposed to care about the young couple (Seyfried and Harry Treadaway) who cross Harold’s path south of the border? How about Richard’s brother, Mitch (Copley) a former soldier of fortune coaxed out of retirement to search for Harold?

There’s never a dull moment, though never a deep one either, for the duration of this hyperbolic homage to incessant overstimulation.

In English, Spanish and French with subtitles

To see a trailer for Gringo, visit: https://www.youtube.com/watch?v=7-bZLM3I-C0

“The Raw Word” Interview with Kam Williams   WITH DAYTIME’S NEWEST ENTRY, ‘THE RAW WORD,’ HOSTED BY DR. MICHAEL ERIC DYSON, UNFILTERED, UNCENSORED AND UNEXPECTED ARE THE RULE AND NOT THE EXCEPTION The Raw Word […]

2018 #StevensStrong Campaign Organized by Dave and Mary Stevens In 2018, to kick prostate cancer’s butt, we are once again supporting Dr. Ken Pienta at The Brady Urological Institute, Johns Hopkins Medicine. Ken is my […]