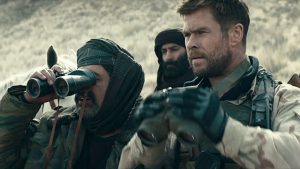 A few days after 9/11, President George W. Bush visited Ground Zero where he delivered his iconic Bullhorn Speech standing atop a pile of rubble. Rising to the occasion, he assured the rescue workers and the rest of America that those responsible for the senseless slaughter would soon be held accountable.

Less than a month later, the first contingent of soldiers was dispatched to Afghanistan. Their top secret operation, code named Task Force Dagger, called for them to be dropped off behind enemy lines where they would rendezvous with a ragtag local militia led by General Rashid Dostum (Navid Negahban). Dostum was understandably-skeptical of the newly-forged, Northern Alliance’s expectations to topple the Taliban regime in just three weeks.

The American Special Forces unit, composed of a dozen elite soldiers, was led by Captain Mitch Nelson (Chris Hemsworth). He was not only confident that the mission would be successful, but made the bold guarantee that no one under his command would perish in battle.

Because of the rugged terrain, they would be forced to negotiate their way through the mountains on horseback, which also enabled them to blend in with the locals more easily. Whenever encountering the Taliban, they were invariably outnumbered and outgunned. However, according to plan, they were always able to improve their odds by calling for air support from B-52 bombers.

Thus unfolds 12 Strong, a true tale of extraordinary heroism in the face of overwhelming odds. Directed by Nicolai Fuglsig (Exfil), the picture is based on “Horse Soldiers,” Doug Stanton’s best seller chronicling the declassified exploits of a brave band of brothers.

The action-oriented saga stars Chris Hemsworth and an impressive support ensemble that features Michael Shannon, William Fitchner, Michael Pena, Rob Riggle and Trevante Rhodes. Reminiscent of such John Wayne classics as The Longest Day (1962) and Sands of Iwo Jima (1949), this unapologetically patriotic war flick is a crowd-pleaser most likely to resonate with the flag-waving ‘God, mom and apple pie’ demographic.

To see a trailer for 12 Strong, visit: https://www.youtube.com/watch?v=-Denciie5oA