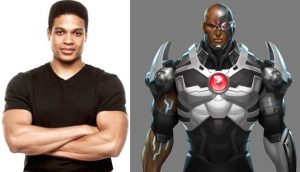 Ray Fisher was born in Baltimore on September 8, 1987, but raised in Lawnside, New Jersey, where he developed an interest in acting while still in high school. After graduating, he attended the American Musical and Dramatic Academy before launching his career.

Ray received critical acclaim for his work on the stage for doing Shakespeare and for playing Tom Robinson in “To Kill a Mockingbird” and Muhammad Ali in an Off-Broadway production of “Fetch Clay, Make Man.” On TV, he’s played Captain Edward Dwight on the adaptation of the best-selling novel, “The Astronaut Wives Club,” into a dramatic series.

In 2016, he made his screen debut as Victor Stone, aka Cyborg in “Batman v. Superman: Dawn of Justice.” Here, he talks about reprising the role in “Justice League” as well as in a planned 2020 spinoff for the DC Comics superhero tentatively entitled “Cyborg.”

Kam Williams: Hi Ray, I’m honored to have this opportunity to speak with you.

Ray Fisher: Thank you, Kam. It’s my honor and privilege.

KW: Congrats on landing the role of Cyborg for your feature film debut on the strength of your stage and TV work.

RF: Thank you. Yeah, I’ve been doing theater since I was 15, and I’ve been pursuing it professionally for about a dozen years now. There were a lot of days of grinding, Kam, a lot of days of trying to make something happen in New York City. I appreciate the opportunity to portray Cyborg in this way, and to have it be such an auspicious start, but it’s not something I could have predicted, at all. If it weren’t for [director] Zack Snyder and our crew on the creative side, I would not be here with you today.

KW: How did you prepare to play Cyborg and his alter ego, Victor Stone?

RF: When they told me about the role, they sent me just about every comic book that Cyborg was ever in, starting with his original iteration from back in the Eighties by Marv Wolfman and George Perez in the New Teen Titans. I would literally read myself asleep going through all those old comics. Luckily, there was a lot of material to study about the character, so I didn’t feel like I needed to create him out of thin air. There were already established parameters for me to work within. On the physical side, before we started shooting the film, they put me in the gym with Jason Momoa [Aquaman], Ezra Miller [Flash], the whole crew and an army of Amazon women who would be in our film. We worked out about two hours a day, five days a week, on top of the five meals a day they would provide. It was a pretty intense experience.

KW: What’s it like being a part of such an accomplished cast and a film series with such iconic characters?

RF: It was fantastic! Everybody was really down to earth. And that’s a testament to Zack Snyder in terms of how he runs his set. I felt super welcome right from the outset. This is a team film, and everybody was there to play their part. There was very little ego involved. Luckily, I had two and a half years before we started shooting to get myself prepared. So, I managed to meet everyone way before the cameras even started rolling for Justice League. It was nice to get those introductions prior to stepping onto the set. That enabled us to develop some chemistry ahead of time instead of having to generate it on the spot the first time the director said, “Action!”

KW: What I find most impressive is the confidence the studio is showing in you by already planning for your character, Cyborg, to have his own stand alone film in a few years.

RF: Yeah, it’s great to be thought of in that way. Things are in development right now. Knock on wood, things go according to plan and that comes to fruition.

KW: Were you already a fan of Zack Snyder, who has made hit after hit, from his spectacular debut in 2004 with Dawn of the Dead clear through Wonder Woman, earlier this year?

RF: Definitely! In fact, Dawn of the Dead was the first DVD I ever bought. I remember that very distinctly, as well as watching it a lot. And he and his wife/producing partner, Debbie, produced Wonder Woman. You’re talking about a man who is so passionate about these characters and his craft that being directed by him never felt like work. I felt like a big kid playing pretend with my friends. It was kinda surreal.

KW: Are you a comic book fan? Who’s your favorite superhero?

RF: Growing up, I didn’t collect comic books, but I did watch every single superhero movie that came out and every superhero series on TV during the Nineties, which I consider the Golden Age of superhero animation. And Batman and Blade resonated with me the most.

KW: Is there a message you want people to take away from Justice League?

RF: I think so, particularly from Cyborg, because each of these characters is going through their own healing process and becoming part of a team for the greater good in order to stop this threat. The message I’d love for people to take away from Cyborg is that no matter how difficult your circumstances may be, whether physically or mentally, there’s always a process by which you can heal. It might not happen all at once, but as long as you take those little steps forward, things can change for the better.

RF: Ooh… That’s a really tough question. If they ever get a remake of Spawn off the ground, I’d love to see what that would be about.

KW: The Morris Chestnut question: Was there any particular moment in your childhood that inspired you to become the person you are today?

RF: I don’t think there was any singular moment, but a bunch of little moments that came together and created the mesh that is me. I’ve been blessed to work with some of the most talented theater people you’ve probably never heard of who aren’t very visible. And I’ve also been fortunate to have the most supportive friends and family that a person could ask for.

RF: I remember my mother buying me a strawberry milkshake from Mister Softee after being stung by a bee.

RF: As I start to age, I feel that I look like my grandpa more and more.

RF: No, I’m pretty approachable, so people ask me all sorts of stuff.

RF: A little gold card with a couple of inspirational quotes. It’s been in my wallet since I was about 13. Let me read you one. “We’re not all designed to be straight-A students, celebrities, world-class athletes or the CEO of a major corporation. But we’re designed to make the most of the skills and abilities we do possess. Perhaps the most splendid achievement of all is the continuing quest to surpass ourselves.”

KW: Sweet! Thanks again for the interview, Ray, and best of luck with the film.

RF: I appreciate your taking the time, Kam.

To see a trailer for “Justice League,” visit: https://www.youtube.com/watch?v=g_6yBZKj-eo

“The Raw Word” Interview with Kam Williams   WITH DAYTIME’S NEWEST ENTRY, ‘THE RAW WORD,’ HOSTED BY DR. MICHAEL ERIC DYSON, UNFILTERED, UNCENSORED AND UNEXPECTED ARE THE RULE AND NOT THE EXCEPTION The Raw Word […]