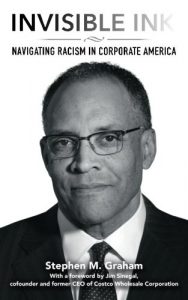 “It has always been a struggle for the relatively few African-Americans in corporate America who do exist, and it is made all the more difficult because we tend to operate in isolation. We are nearly always alone, with no one to fall back on… as we deal daily with an unending stream of slights real and imagined.

Even those who do care don’t really understand. This is all played out in an environment where we are subjected to a debilitating undercurrent of bias that too many, on both sides of the divide, pretend does not exist…

The point of this book is not that the world is an awful place where things never go right but that institutional racism is a virus that is alive and well and needs to be eradicated if fundamental fairness is to be achieved. Black lives matter, and we must take issue and demand change, whether these lives are literally snuffed out in the blink of an eye or figuratively snuffed out in the polite confines of corporate America.” 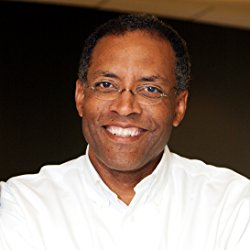 By any measure, Stephen Graham’s would be considered a success story. After earning a B.S. from Iowa State University, he went on to Yale Law School en route to an enviable career as one of the country’s top attorneys in the field of mergers and acquisitions.

So, one might expect that when he decided to write a book, it would basically be about how he managed to achieve the American Dream. But he opted to focus more on the impediments he encountered on his rise up the corporate ladder than on the satisfaction of making it to the top of his profession.

That’s because he’s black and he doesn’t want any African-American attempting to follow in his footsteps to think that the struggle is over once you receive an Ivy League degree. For, as he points out in Invisible Ink, a pernicious pattern of prejudice persists in the business world from the bottom rung all the way up to the rarefied air of the wood-paneled boardroom.

The author makes the persuasive case that there’s no reason for the U.S. to rest on its laurels just because it elected Barack Obama president. He also says that it is shortsighted to worry only about the plight of poverty-stricken blacks stuck in inner-city ghettos.

No, Graham argues that insidious forms of institutional racism have continued to frustrate members of minority groups, too, long after the demise of de jure discrimination. What he finds troubling is the fact that the favoring of whites is now very subtle indeed, making bigoted behavior often difficult to identify, let alone challenge.

Overall, an intelligent, eye-opening opus relating a riveting combination of touching personal anecdotes and sobering advice about what needs to be done to finally achieve that elusive ideal of a colorblind society.

2018 #StevensStrong Campaign Organized by Dave and Mary Stevens In 2018, to kick prostate cancer’s butt, we are once again supporting Dr. Ken Pienta at The Brady Urological Institute, Johns Hopkins Medicine. Ken is my […]