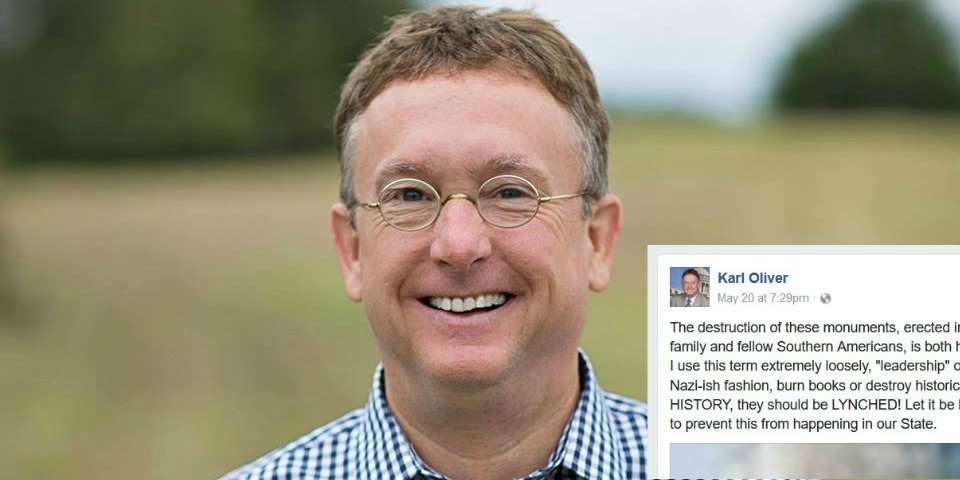 JACKSON, Miss. (AP) – The Latest on comments made by a Mississippi lawmaker over the removal of Confederate monuments (all times local):

The Mississippi NAACP is calling for the resignation of a Mississippi lawmaker who said Louisiana officials should be lynched for removing Confederate monuments.

Republican Rep. Karl Oliver apologized Monday for the lynching remark that he made Saturday in a Facebook post.

Mississippi NAACP President Derrick Johnson says the apology is not enough and Oliver should step down. Johnson says: “Anyone who champions a fond remembrance of such a violent, racist history is unworthy of elected office.”

Sherrilyn Ifill, national president of the NAACP Legal Defense and Educational Fund, says Oliver’s post about lynching was “shocking in its ignorance and abhorrent in its violence.”

The mayor of New Orleans says a Mississippi lawmaker’s remark about lynching shows the city was right “to tackle the issue of race head-on” by removing Confederate statues.

Oliver apologized for his comments Monday.

Three statues removed in New Orleans were of Confederate figures and a fourth honored white supremacy.

Councilman James A. Gray II represents a majority African-American district and supported the recent removal of four statues – three of Confederate figures and one that honored white supremacy.

Gray says calling for a lynching “is inciting the murder of American citizens, and that’s a crime that ought to be prosecuted.”

Mississippi state Rep. Karl Oliver, who is white, apologized Monday for a Facebook post he wrote Saturday in which he mentioned lynching as punishment for removing Confederate statues.

A Mississippi lawmaker says he was wrong to call for Louisiana leaders to be lynched for removing Confederate monuments and is asking for forgiveness.

Republican state Rep. Karl Oliver of Winona says in a statement Monday that he wants to apologize to his colleagues and to the state of Mississippi.

Oliver set off a wave of criticism after posting on his Facebook page Saturday night that the destruction of monuments is “heinous and horrific” and that Louisiana leaders should be lynched.

The post was in response to the removal of three Confederate monuments and a monument to white supremacy in New Orleans.

Oliver says he was expressing his “passion for preserving all historical monuments” but that the word lynching is never appropriate.

A Mississippi lawmaker is saying Louisiana leaders should be “lynched” for removing Confederate monuments.

Republican state Rep. Karl Oliver of Winona says in a Facebook post that the destruction of monuments is “heinous and horrific.” He accused Louisiana officials of acting in a Nazi-like fashion.

The post was made Saturday night, after three Confederate monuments and a monument to white supremacy were removed in New Orleans.

Oliver did not immediately respond to email and phone messages from The Associated Press seeking comment Monday.

Gunn says using the word “lynched” is “inappropriate and offensive.” He called on Oliver to apologize.

Bryant says Oliver’s language is “unacceptable and has no place in civil discourse.”