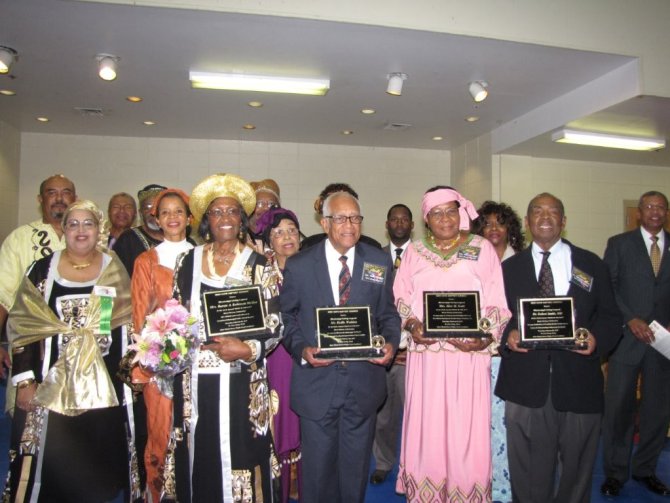 During their History is Lunch Series, the Mississippi Department of Archives and History gave voice to long-time civil rights activist/founder of the Veterans of the Mississippi Civil Rights Movement, Hollis Watkins May 3.

With C. Liegh McInnis, an instructor of English at Jackson State University and former publisher/editor of Black Magnolias Literary Journal, Watkins discussed various aspects of his book, Brother Hollis: The Sankofa of a Movement Man, the author’s first book. The well-written book breaks ground by detailing what black life is like in America along with analyzing and critiquing the black leadership establishment. Watkins explained that he grew up in a family that emphasized respect and truth. His parents chastised him and his siblings if they were found disrespectful and/or guilty of lying.

“Ultimately, my childhood taught me that we black people have the ability to be our best solution if parents and adults recommit to being involved in every aspect of children’s lives.” The author legitimized his claim when he indicated that every aspect must have vision and structure. “Young people must understand that hard work is the only way to take control of one’s life,” said the civil rights activist.

Reminiscing about his days on the farm, Watkins pointed out that he was being prepared for various jobs in the movement. “It gave me the insight to ensure that everyone who worked with me or under my supervision could do anything that needed to be done,” he chuckled. Watkins argued that because of his instilled values, he never thought of segregation or white oppression as what was to be expected. He only viewed those elements as someone else’s perverted notion of how life should be.

“As I came into contact with other blacks, I desired that they have the same understanding of life that I had. Therefore, the Civil Rights Movement made it easy for me to transfer my desires for their freedom to them,” said Watkins. The hole was a six ft. by six ft. place where Watkins and other protestors were jailed.

According to Watkins, “We all were blessed that we didn’t die from carbon monoxide poisoning. But we used solitary confinement to our satisfaction. We discovered that if we didn’t go into the hole as a large group, then it wasn’t too bad. We sang and sang and sang and after a while officials let us out.”

McInnis zoomed in on Freedom Summer which stemmed from the 1963 Freedom Vote Campaign whereby Northern whites came to Miss. and volunteered in a mock gubernatorial election and demonstrated that, if given the opportunity – free of harassment and intimidation, blacks would register to vote.

In Neshoba County these white volunteers put their lives on the line. Said Watkins in retrospect, “I don’t think we had any volunteers who went back home. But I have had more success with young people outside Mississippi as opposed to those inside.” “A chapter of the book is devoted to unsung heroes. He (Watkins) was determined to devote a substantial number of pages to people who are unsung – people who prepared lunches, donated money on the side, etc. were important,” said McInnis.

Considerable attention was devoted then to Southern Echo, an organization founded by Watkins who serves as its president. Southern Echo provides training throughout Mississippi and the region in politics, education, environmental concerns, economic development and community organizing.

Watkins became the lead plaintiff in a federal lawsuit challenging Mississippi’s districting. “We were able to get people in Mississippi to see the importance of redistricting. I saw that we had to start defining things for ourselves.” Contrary to leadership actions of yesterday, Watkins noted that today many things are done via mobilizing rather than organizing. “We were better off in Mississippi because we formed COFO (Council of Federated Organizations).

Watkins explained that he and his constituents were following a process but didn’t realize the power that came from President Lyndon B. Johnson. Johnson was interested in obtaining votes from the Mississippi delegation. So he set out to stop the Mississippi Freedom Democratic Party. “Those kinds of things prevented us from getting what we deserved,” said Watkins.

During Watkins’ book signing, Pamela Junior, director of The Mississippi Civil Rights Museum, said, “My thing is how wonderful it is to have a soldier of the Civil Rights Movement who has written a book about his experiences. Our young people know how to mobilize, and they do it so wonderfully through social media. But we need people like Dr. Hollis Watkins to teach how to organize. The Civil Right Movement was an inclusive movement of all people. All these people were young. They started a movement to continue the legacy. Whenever I’m in Dr. Watkins’ presence, I’m struck.”