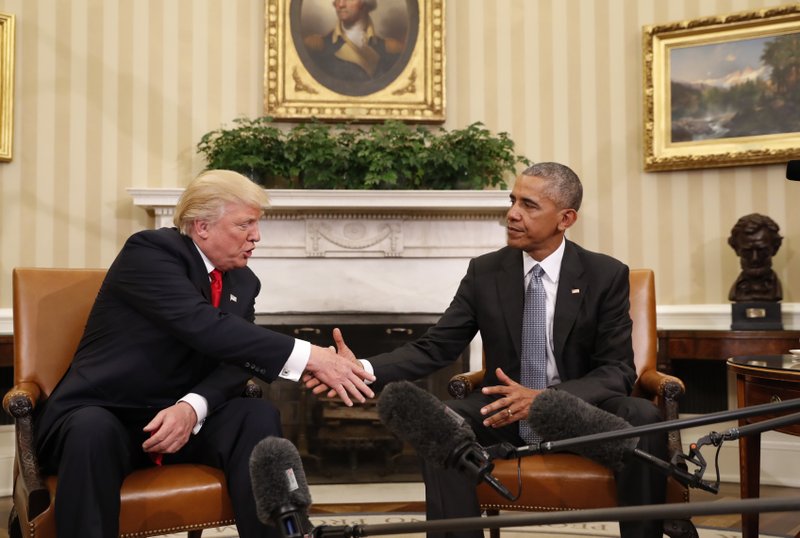 In an Oval Office meeting with Trump two days after the November election, Obama told his successor that there were more qualified candidates for the crucial White House post, according to one official. Flynn was fired as head of military intelligence by the Obama administration in 2014 amid questions about his management style and reports of insubordination. He became a fierce critic of Obama’s policies and a fervent Trump supporter.

Trump ignored Obama’s advice and tapped Flynn for the top White House national security role. But Trump would ultimately seek Flynn’s resignation less than a month into his tenure, following news reports that Flynn had misled Vice President Mike Pence and other top officials about his conversations with Russia’s ambassador to the United States.

The Trump White House on Monday confirmed that Obama raised concerns about Flynn in the November meeting.

“President Obama made it known that he wasn’t exactly a fan of Gen. Flynn’s,” White House spokesman Sean Spicer said. He suggested Obama’s views were shaped by Flynn’s criticism of his national security policies.

The former Obama administration officials requested anonymity in order to disclose the private conversation between the current and former president.

Flynn’s discussions with the Russian envoy have been scrutinized as part of an FBI and multiple congressional investigations into possible ties between Trump’s campaign and Russia’s meddling in last year’s election. Trump has denied that his aides were involved in the hacking of Democratic groups, but the investigations could cast a shadow over his White House for years.

Monday’s revelation from Obama administration officials came hours before former acting Attorney General Sally Yates and former Director of National Intelligence James Clapper testified before a Senate panel investigating the Russian election interference. Yates detailed her own warnings to the Trump White House about Flynn, including meetings with the White House counsel in which she said that discrepancies over Flynn’s contacts with the Russian envoy left him vulnerable to blackmail by Moscow.

Despite firing Flynn, Trump has tried to paint his former national security adviser as a victim of illegal leaks of classified information by Obama officials. He’s also tried to pin Flynn’s troubles on Obama, noting that it was the previous administration that continued to approve Flynn’s security clearance after he was fired.

“General Flynn was given the highest security clearance by the Obama Administration — but the Fake News seldom likes talking about that,” Trump wrote on Twitter Monday morning.

Flynn’s conversations with Russian Ambassador Sergey Kislyak caught the attention of Trump’s own transition team. Last week, The Associated Press reported that a transition aide asked Obama officials for a copy of the CIA’s classified biography on Kislyak because the aide was concerned Flynn didn’t fully understand the envoy’s rumored tied to Russian intelligence.

Flynn had multiple contacts with Kislyak during the transition, including an in-person meeting at New York’s Trump Tower that was also attended by the president’s son-in-law, Jared Kushner. One of Flynn’s calls with Kislyak came on Dec. 29, the day Obama leveled sanctions on Russia in retaliation for the election hacking.

The Trump transition team initially denied that Flynn had discussed the sanctions in his call with Kislyak. Pence vouched for Flynn in television interviews, using information he’s said came from the national security adviser.

Yates said Monday that she met with the White House counsel in the days after the inauguration to alert him that the Justice Department had information showing Flynn’s account of the calls was not accurate. Flynn’s conversations with Kislyak are believed to have been monitored as part of normal U.S. intelligence collections on the communications of foreign officials.

President Obama acknowledges birth of the blues in Mississippi

By Monica Land WASHINGTON, D.C. – In his opening remarks Tuesday night at the “In Performance at the White House” Blues Event, President Barack Obama spoke to his guests on how the blues traveled from […]

The Mississippi Link Newswire NEW YORK–Porn star Stormy Daniels sued President Donald Trump on Tuesday, alleging that he never signed a non-disclosure agreement she agreed to in exchange for $130,000. Daniels, whose real name is […]

By Lauren Victoria Burke NNPA Newswire Contributor In an effort to show that he plans to be the “president for all Americans” and to bolster support in the black community, President-elect Donald Trump has met […]