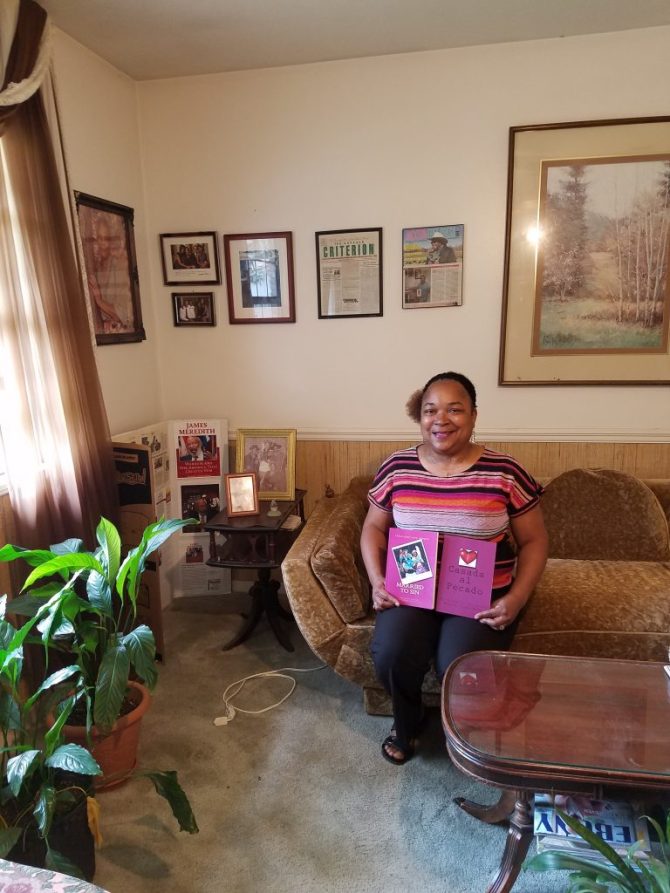 Meredith Coleman McGee, sits in the comfort of her home holding two copies of the book Married to Sin that she co-authored with Darlene D. Collier, sexual assault victim. The book has English and Spanish translations.
Photo By Janice K. Neal-Vincent

According to the National Sexual Violence Resource Center, unwanted sexual contact is known as sexual violence.

This type of abusive behavior can claim anyone, despite his/her age. It can occur as force, threats, manipulation or coercion. Not only is the person under attack affected, the entire family can feel the devastating blow.

Co-authors Darlene D. Collier and Meredith C. McGee flood the pages of their book ‘Married to Sin’ with the Mose Dantzler family’s hidden secrets of sexual and physical abuse for many years. This trauma narrative confronts the evils and perils of the abusive behaviors and claims healing as a sound dosage of medication and remedy to the bondage in which victims and their loved ones find themselves.

“Darlene Collier discovered this path of personal healing on her own and by sharing her story she has given the world a wonderful work that has the potential to benefit other victims and enlighten those of us who love them and work with them,” said Mississippi Gulf Coast psychotherapist Vickie Barlow.

Collier, a Brandon resident, said during a telephone interview, “I was molested by one of my relatives in Heidelberg, Miss. he is still living there.” Reflecting on childhood encounters, Collier said remorsefully, “I was scared to get off the school bus. He would rub his private part against me.”

Collier continued: “All five of my children and my two grand boys became victims of incest. I asked my children not to touch my grand boys. I didn’t know what was going on. I told them we all had to work through it.

Rape started with my in-laws. The mother-in-law would let my daughter Renae kiss her and the in-laws had the children rape each other. My husband raped his sisters. I wasn’t strong enough to get out of the marriage.”

Collier claimed that she remained in her marriage because she feared God. “God eventually freed me when my husband died in 2008,” she contended.

Co-author McGee was interviewed in her home. She contends that incest existed in the Dantzler family for three generations on King Cotton Road in rural Brandon, Miss.

Collier’s children Renae and Junior were molested as early as ages four and five. McGee went on to say that this culture of sexual abuse was so deep that when he was a teen, Junior raped Ranae and James.

The sexual abuse was met with consequences. According to McGee, Renae resorted to drug abuse and became a promiscuous nymphomaniac who willingly engaged in sexual relations with one of her uncles. “Though she no longer uses drugs, Renae has never really healed because she never had the proper help,” said McGee.

James and Junior became criminals. James’ first act of crime was to steal his mother’s car and a yellow school bus. James has been in and out of jail. “Junior was involved in a love triangle between his wife and a distant relative,” said McGee. Junior has been out of prison since 2011 and has not been in trouble. McGee indicated that molestation occurred when Collier and her husband were away from home. “But people act out this culture when it’s taught to them,” she said.

In retrospect McGee stated that readers considered the book a relief if they had experienced these things in their families and were able to move on. “Darlene moved on to be happy. She made it and kept moving forward, doing great things,” McGee claimed.

Persons interested in engaging in conversation with co-authors Meredith McGee and Darlene Collier may visit their websites www.darlenecollier.com or www.meredithetc@bellsouth.net or call 601-715-0734 or 601-372-0229.