Hundreds of supporters of the Black Lives Matter and Fight for $15 movements demanded higher wages and equal rights as they walked more than a mile (1.6 kilometers), from Memphis City Hall to the National Civil Rights Museum.

The museum is at the site of the former Lorraine Motel. King was standing on the motel’s balcony when he was shot down by a sniper’s bullet on April 4, 1968. He was in the midst of his “Poor People’s Campaign” when he came to Memphis to support striking sanitation workers seeking better pay, safer working conditions and union rights.

Led by a 220-piece band from Talladega College in Alabama, marchers chanted “This is what democracy looks like” and held signs saying “I Am A Man.” Some wore T-shirts emblazoned with the words “Show Me $15. Real Change. No Pennies.”

The Fight for $15 group wants a higher hourly minimum wage for low-pay workers, including fast food employees and home and child care workers. The Black Lives Matter movement developed after the deaths of unarmed black men during confrontations with white police officers and has waged protests throughout the country.

Marchers also came from Arkansas and Missouri to join their Tennessee colleagues. Police did not immediately have an estimate of the number of marchers who participated.

Renita Moore, a 54-year-old nursing assistant from St. Louis, said raising the minimum wage is important because her cost of living keeps going up.

“We’ve all come together as one,” Moore said. “It’s very important that we stick together, stand together and fight together.”

The march was one of many King-related events in Memphis.

Earlier Tuesday, more than 200 people gathered at Mississippi Boulevard Christian Church to hear the Rev. Jesse Jackson and the Rev. William Barber talk about how King’s fight for economic and racial equality and social justice is far from over.

A vocalist belted out a religious hymn and another song, “The Impossible Dream,” and attendees held hands in prayer.

The pastor of Greenleaf Christian Church in Goldsboro, North Carolina, was critical of President Donald Trump, including his effort to suspend new visas for people in six Muslim-majority countries. He called Trump a “narcissistic tweeter.”

“We are not those who believe the terrible lies that the best way to better America is to attack public education and attack Muslims and attack immigrants and attack living wages,” said Barber, progressively raising his voice. “How in the world can America attack refugees when we sing ‘God bless America, shed his grace on us,’ but we don’t have grace for immigrants? That’s contradictory to everything we say we believe.”

Then, he added: “We are the crowd that believes in justice and love and mercy and goodness and hope, the common good, the general welfare. We believe ‘liberal’ is a good word, and ‘conservative’ is a good word.”

Outside the church, Sharon Johnson, 60, said she came to the rally to honor King’s memory.

“He came from the right place in his heart, believing that all people are equal, that everyone should be treated with respect, that people deserve equal pay for their work,” said Johnson, a pharmacy technician. “He sacrificed his life to make that happen.”

Rallies also were scheduled in Florida, California, Illinois, Massachusetts and Michigan. In Boston, dozens of people marched through the Boston Common to call for less racism and a higher minimum wage. Marchers held a moment of silence at 6:01 p.m. Central Time to mark when King was shot. 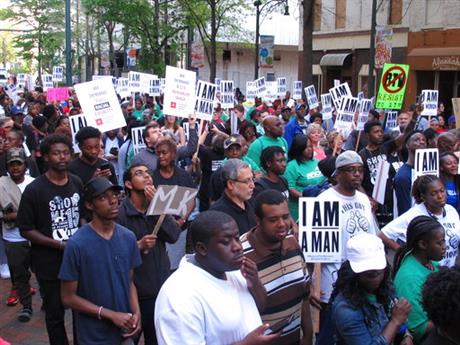 MEMPHIS, Tennessee (AP) — A news report says the mother of four children who authorities say were fatally stabbed in a suburban Memphis apartment complex has been charged in their deaths. Citing a charging document, The […]

From Trayvon Martin to Michael Brown to Tamir Rice