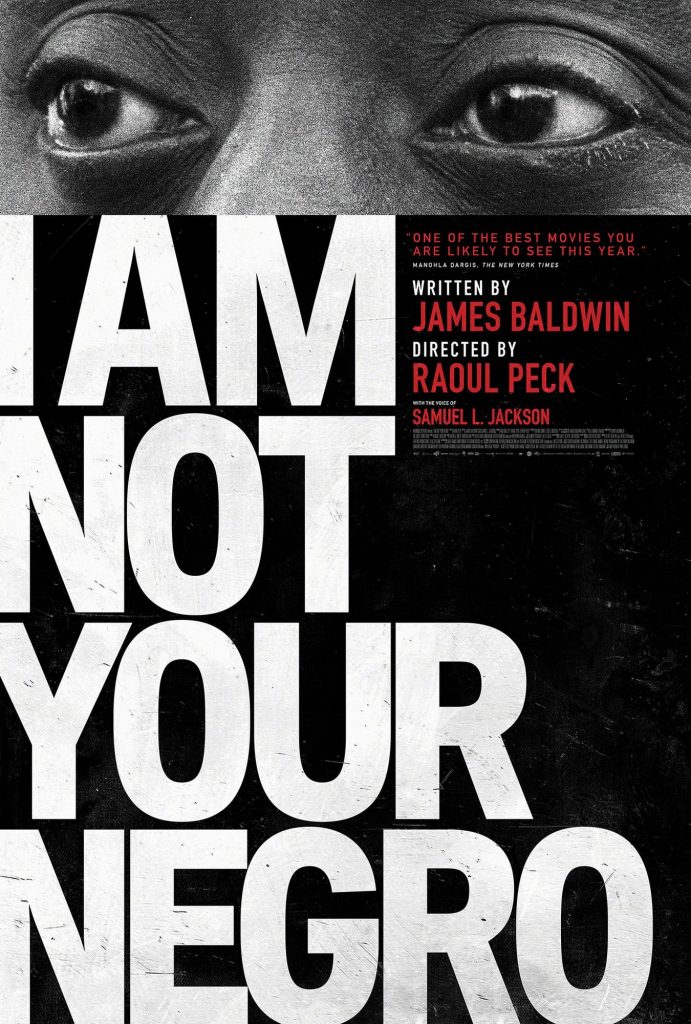 Haitian filmmaker Raoul Peck’s 2016 American documentary film, I Am Not Your Negro, explores Baldwin’s stern assessment. The familiar voice of Samuel L. Jackson is the one we hear narrating the provocative PG-13 movie. Peck utilizes his knowledge and expertise to convey the overarching message of I Am Not Your Negro with the right elements.

Within the film lies images depicting cruelty during slavery; police brutality; non-violent resistance; Baldwin’s vocal and bodily expressions; attentive expressions of those who see him speak and time periods that reflect continued degradation. Prevailing as well are expressions of self-hatred and expressions of sought after apologies.

Sound effects come in the form of songs and music reflecting the continued struggle. Assumed idealism floats also, in light of a false sense of security on the parts of both black and white races. These elements enable the viewer to think about his/her own lived experiences while grappling with the American way of life. Thus, Baldwin’s appeal to the viewer to examine his/her soul is highly recommended for this 95-minute movie. Baldwin understands his power as a human being and as a black man.

Never backing down, he presses forward as critic by rejecting a paradoxical America that is hindered by white Americans to reach its fullest potential of democracy. The social activist bluntly states that the country cannot mature until it comes clean with the trauma it has inflicted upon the black race since slavery.

Baldwin’s own words rest upon his determination for America to look in the mirror for self-examination: “The future of the Negro in this country is precisely as bright or as dark as the future of the country – it is entirely up to the American people whether or not they are going to try and find out in their own hearts why it was necessary to have a nigger in the first place, because I’m not a nigger, I’m a man, but if you think I’m a nigger, it means you need it. Then you’ve got to find out why. And the future of the country depends on that.” Despite recalling his lived experiences as an American citizen, Baldwin examines the roles played by Medgar Evers, Malcolm X and Martin Luther King Jr. during the Civil Rights Movement. In his charge he reminds the viewer that these leaders’ lives were snatched away by the hands of assassins.

He continues that there are no black leaders because they, too, will be killed. That examination festers into the modern era’s expressions of Black Lives Matter resulting from a number of murders of young black males. Further, “If a black man says as Patrick Henry, ‘Give me liberty or give me death,’ he is judged a criminal and would be made an example of so they’ll be no other like him.” Hence, the subjugated sense of reality is destroyed.

Flashes of the labor process are shown during Baldwin’s assessment. Regarding the selling of the Negro, the critic argues that cheap labor is a mechanism that has boosted the economy. “The economy, especially of the southern states, could not conceive of what it has become if it had not been for so many generations of cheap labor,” he said. Nevertheless, Baldwin quips that he is not an object of charity, but instead a citizen who has built America. I sanction this film and recommend that viewers see it several times. Visited upon America’s youth and adults are habitual ways of cruelty that have been passed down through generations. America’s present and future depend upon rising above a psycho dramatic world of fantasy into respectable modes of conduct. Continuing the cry that all citizens are needed to build the American soil by moving it into a democratic reality, rather than merely a dream is what will save it. Those who sit back and allow criminal perpetrators during these modern times to destroy their well-being are just as guilty as the perpetrators. Those who do not know their history are doomed to repeat it. Those who fail to teach youth about their past are paving the way for them to have a false sense of identity and to react accordingly.

Tickets are available at Malco April 7 or online at www.crossroadsfilmfestival.com.