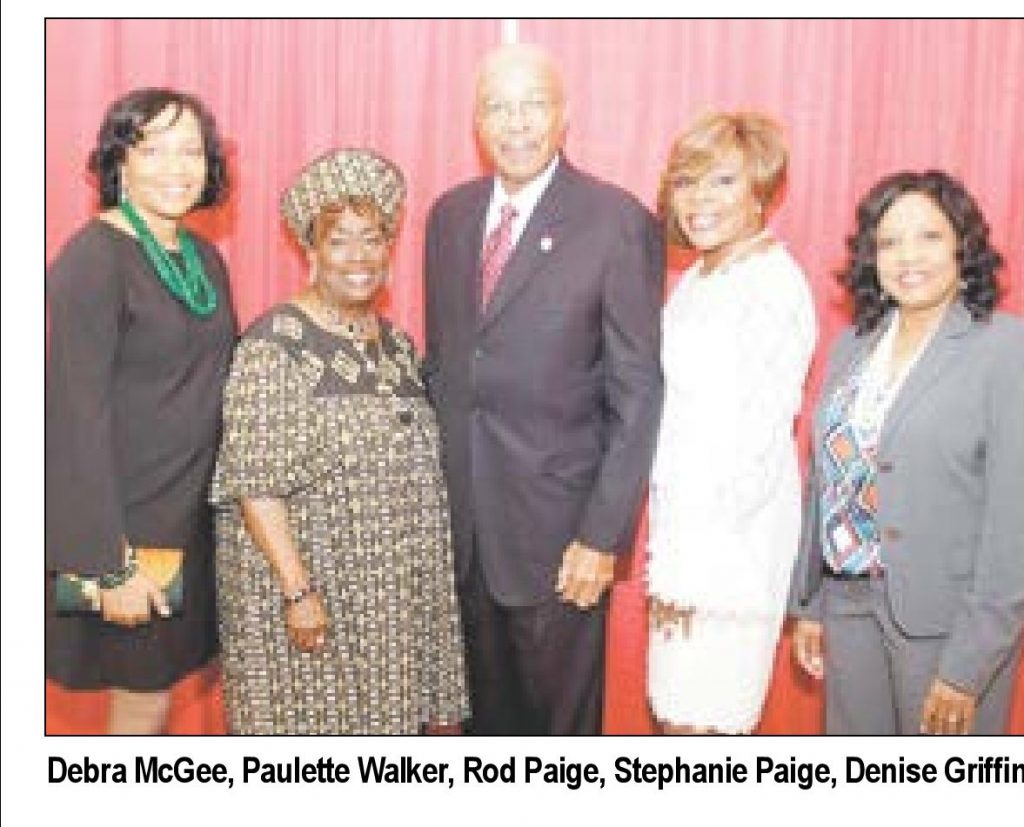 “Honoring the Legacy: In Pursuit of Excellence” was the theme of the Annual Heritage Samuel L. Bailey Scholarship banquet held at College Hill M.B. Church Saturday night. This yearly event honored the late Samuel L. Bailey, a civil rights advocate who worked for racial equality in Mississippi. Jennifer Steele-Wilson presided over the event.

The guest speaker for the occasion was Rod Paige, interim president of Jackson State University. He was introduced by Debra McGee. Paige, speaking to a large crowd in the family life center said, “We all have a responsibility to those who did the work for us during slavery and segregation.” “If I were to title my message it would be “A Message of Hope.” Paige took the audience back 400 years to the beginning of slavery.

He reminded us that our ancestors had been in slavery longer than the country had been out of slavery. He talked about how our ancestors had been loaded on crowded slave ships and taken against their will to America from the African shores. He said, “many did not survive that journey which lasted 60–90 days while packed on those ships like sardines.”

He told the audience our ancestors were strong, tough, courageous and only the strong survived. He said it is time for everyone to share the burden of helping to move this nation forward and the vehicle to moving the nation forward is education.

The highlight of the evening was the awarding of the College Hill Black Achiever Award and the awarding of the Samuel L. Bailey Scholarship awards. Wanda Brown presented the College Hill Black Achiever Award to Vannette Montgomery. Montgomery is a school teacher at Main Street Restart Center in Bolton, Miss., where she teaches course recovery to students who are behind and need a restart.

She is a devoted church worker at College Hill where she is superintendent of the early education department, Vacation Bible School director, president of the adult choir, and works in other areas in the church and community.

Prior to the presentation of the Samuel L. Bailey Scholarship Awards, Justin Coleman gave a history of the scholarship. He said that Bailey, who served many years as president of the NAACP, was one of three men who filed a Federal suit to desegregate public transportation and accommodations in Mississippi. He also was responsible for improving voter registration by going door to door encouraging Mississippian’s to register.

Frank Yates of College Hill presented the Samuel L. Bailey Ordinary Man Scholarship and four book stipends to high school seniors. He stated that all the students ranked very high in their classes and had written excellent essays, which was the major criteria along with community service and grade point average.

Many attending the banquet commented on how much they enjoyed all the talent displayed. Brandon Mitchell, music director at College Hill sang a medley of Negro Spirituals; Carter Barnes gave an instrumental solo and Charence Higgins, 2015 Miss JSU gave a Thank-You Heritage Tribute, which tied into the message of hope delivered by Paige.

Another highlight of the evening was a $10,000 check presented by Denise Griffin to Paige for JSU on behalf of 34 chapters of Delta Sigma Theta from across the state. Paulette C. Walker, president of Delta Sigma Theta, attended the banquet. Walker, from Tampa, Fla., was in Jackson for the organization’s Founders Day event.

Pastor Michael T. Williams acknowledged the committee for the success of the banquet and thanked Paige for the speech he made, which Williams described as “outstandingly excellent.”

Shirley Bailey Johnson the daughter of the late Samuel L. Bailey came from Miami, Fla. to attend the banquet. Also in attendance was Verna Bailey of Portland, Oregon, also the daughter of the late Sam Bailey. The sisters spoke warmly regarding memories of their father and the work he did in the area of civil rights. They also presented a $3000 check to the College Hill Scholarship Committee.

By Rod Paige Former U.S. Secretary of Education “And other seeds fell into good soil and produced grain, growing up and  increasing and yielding thirtyfold and sixtyfold and a hundredfold.” – Mark 4:8, Holy Bible, […]

College Hill – 110 years of laboring in the Spirit

By Daphne M. Higgins Religion Editor “Come along, my friends come along” were the first lyrics sung by the male chorus of the First Missionary Baptist Church of Gulfport during the 110th year church anniversary […]