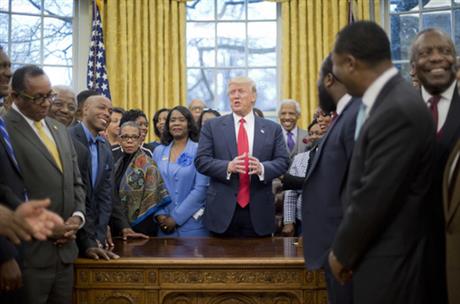 President Donald Trump speaks as he meets with leaders of Historically Black Colleges and Universities (HBCU) in the Oval Office of the White House in Washington, Monday, Feb. 27, 2017. (AP Photo/Pablo Martinez Monsivais)

WASHINGTON (AP) — Presidents from a majority of the country’s historically black colleges and universities are in Washington this week, calling for $25 billion in the upcoming budget to help address priorities including infrastructure, college readiness and financial aid as President Trump prepares to sign an executive order aimed at signaling his commitment to the schools.

Trump met briefly with the college leaders on Monday, posing for a photograph in the Oval Office before the group met with Vice President Mike Pence and Education Secretary Betsy DeVos. Tuesday’s order is expected to move the White House Initiative on Historically Black Colleges and Universities from the Department of Education into the White House. A senior White House official said the order was intended to prioritize the initiative and make it easier to partner with various federal departments and agencies.

The moves are among the actions some college presidents said they would like to see coming from the new administration. For some, their decision to come to Washington was over the objections of students and alumni, but they say they can ill afford to play politics as Trump moves quickly to set priorities.

Florida A&M Interim President Larry Robinson said it is important for schools like his to have a seat at the table early.

“We are the subject matter experts in terms of what needs to be done,” Robinson said. “We wanted to communicate that to those who were receptive of doing something on our behalf … regardless of who’s sitting in the White House, or what their political affiliations are.”

Though Trump did not have a plan to address HBCUs during his campaign — unlike Democratic presidential candidate Hillary Clinton — the Republican was swift to signal his support for the schools soon after his inauguration. Administration officials vowed that he would take action on HBCUs during Black History Month, which ends Tuesday. One of the president’s most visible black aides, Omarosa Manigault, holds degrees from two HBCUs: Central State University in Ohio and Howard University in Washington.

On Tuesday, the college presidents will spend the day on Capitol Hill, lobbying Congress for more funding. Grambling State University President Rick Gallot said he was encouraged by Monday’s meeting and saw a government interested in a meaningful partnership. Gallot is hoping the initial meetings will lead to more access to research opportunities for his school.

“As HBCUs, we’ve always done what politicians stress to agencies: To do more with less,” the head of the Louisiana college said. “Think of the opportunities that would be there to do more with more.”

Gallot pointed out that more than 90 percent of his students are eligible for the federal Pell grant, and added he would like to see the program strengthened and made into a year-round opportunity.

Trump’s executive order is also aimed at helping the HBCU initiative work as a partner in the president’s agenda, including job creation, community revitalization and making inner cities safer, according to the official who briefed reporters on condition of anonymity, despite the president’s recent complaints about un-named sources.

Florida Memorial University’s Roslyn Artis said she is looking to play to Trump’s CEO background, looking for tax incentives that would attract government contractors and private companies to invest in HBCUs.

“We’re appealing to his good business sense and hoping he finds an investment worth paying for,” she said, adding that Florida Memorial leadership had several listening sessions with its campus community ahead of the Washington trip to allay concerns. “The reality is, we as HBCUs don’t’ have the luxury of playing politics. It’s really about policy for us.”

The presidents were invited to Washington by the Thurgood Marshall College Fund, the nonprofit umbrella organization of public HBCUs headed by Johnny Taylor, who said he reached out to both presidential campaigns about support for the schools last summer. Taylor pointed out that two-thirds of HBCUs are in red, or Republican-oriented states, and that the colleges are heavily reliant on federal and state funding to survive — meaning HBCUs must meet with the administration, despite the fact that only 8 percent of African-Americans voted for Trump.

“Taking that position was met with great skepticism, and in some cases, outright refusal to cooperate, but the idea that you would not talk to this group is silly,” Taylor said at a reception his organization sponsored Monday.

The Marshall fund and the United Negro College Fund, which supports private HBCUs, have been lobbying Trump to support the colleges. Taylor said Trump’s swift action on many of his campaign promises sends a message that he will take action without worrying about the political winds.

“You can like or dislike his position, but one thing about him: If he says it, you can count on it,” Taylor said.

“There is no substance at this point,” she said, cautioning to wait for the contents of the executive order and the budget process. “The proof is in the pudding.”