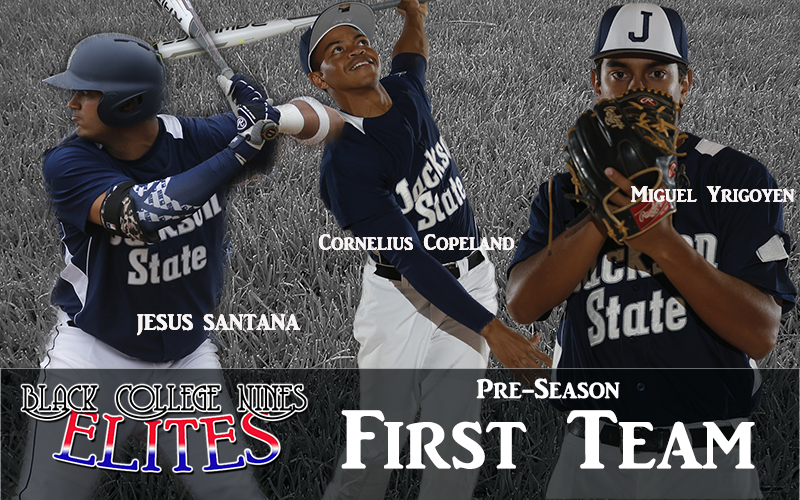 Jesus Santana, Cornelius Copeland, and Miguel Yrigoyen were all named to the preseason first team. Santana, junior infielder, was named as the Black College Nines’ first team first baseman. During the 2016 season, Santana was the only Tiger to play and start in all 60 games and he led the JSU and the Southwestern Athletic Conference in homeruns with 17. His other accomplishments include SWAC Post-Season Second Team, SWAC Hitter of the Week, and national rankings in home runs per game, RBIs per game, home runs, runs and RBIs.

Cornelius Copeland, senior infielder, was named as the first team shortstop. Copeland played and started in 54 games and maintained a .422 batting average, a .631 slugging percentage, and a .537 on-base percentage. Because of his effort during the 2016 season, he was named to the All-SWAC First Team and the SWAC Baseball Championship All-American Team. He also ranked third nationally in batting average and ninth in runs-per-game.

Miguel Yrigoyen, senior right-handed pitcher, was named as a pitcher to the first team. Yrigoyen collected 16 appearances with 13 starts for a 4.61 ERA and a 9-3 record. Because of his effort, he was ranked first in the SWAC in batters struck out, first in in batters struck out looking, second in games started, and third in wins. He was also named to the 2016 All-SWAC second team.

The Jackson State baseball 2017 season begins Saturday, Feb. 18 when they take on Morehead State at 12 p.m. a Robert ‘Bob’ Brady Field located on the campus of Jackson State University.

JACKSON, Miss. (AP) – Mississippi’s College Board has rejected a proposed settlement of a lawsuit against Jackson State University by a former women’s basketball coach. The Clarion-Ledger (http://on.thec-l.com/2cX6OeE) reports the board rejected the agreement with […]

The Mississippi Link Newswire JACKSON, Miss. – The Jackson State University has named Camille Ross to lead its women’s track and field and cross country program. Her start date is set for Oct. 19. Ross […]