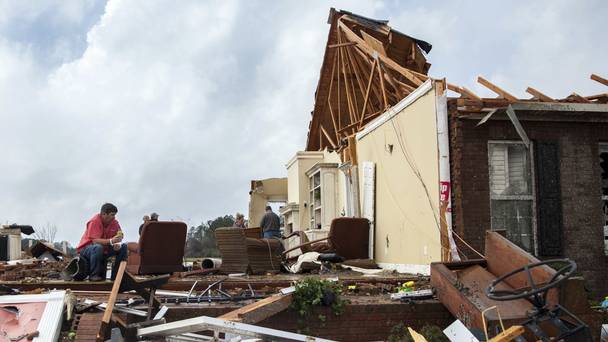 An apparent tornado blew through a mobile home park early Sunday in southern Georgia’s rural Cook County — sheering off siding, upending homes and killing seven people, local authorities said. An eighth death was reported in Cook County by state officials, although it was unclear whether that victim lived in the park.

Two people apiece were confirmed dead in neighboring Georgia counties, bringing the state’s toll to 12 a day after a reported tornado killed four in Mississippi. And the deadly weather wasn’t over as night fell Sunday.

Search and rescue operations were underway Sunday night in Dougherty County, where a reported tornado carved a long path of destruction at about 3 p.m., said Sedon Burns, the county’s chief deputy emergency manager. The county is home to Albany, southwest Georgia’s largest city with about 76,000 residents.

“We know we have fatalities and a lot of injuries,” said Burns, who declined to estimate how many were dead or hurt. “And there is substantive damage to one of our trailer parks.”

An Associated Press reporter arriving in Albany saw several police and State Patrol cars heading to one area with lights flashing, as well as three ambulances. There were downed trees along the road and traffic signals were without power. A helicopter hovered overhead not far away.

About 12 hours earlier — and 60 miles to the southeast — an apparent tornado “leveled” a Cook County mobile home park before dawn Sunday and emergency responders searched for survivors for hours after the twister struck, said Coroner Tim Purvis. Purvis said the park had about 40 mobile homes, and roughly half were destroyed. The area was cordoned off by police.

Not far from the mobile home park, 19-year-old Jenny Bullard wore a sling on her injured arm as she combed through the rubble of her family’s brick house. All that remained standing Sunday afternoon was the master bedroom and parts of the kitchen.

“It’s a horrible tragedy,” Bullard said. “But all this stuff can be replaced. We can’t replace each other. We’re extremely lucky.”

Bullard said she awoke before dawn Sunday to the sound of hail pounding the roof. When she went outside her bedroom door, she was knocked down by a collapsing wall in the hallway. She managed to get up and found her father calling for her, trapped under debris.

She pulled him free, and they found her mother in the master bedroom. They escaped by climbing over piles of furniture and debris where the wall to their home office once stood.

President Donald Trump said Sunday he had spoken with Georgia Gov. Nathan Deal and “expressed our sincere condolences for the lives taken.”

“Tornadoes were vicious and powerful and strong, and they suffered greatly,” Trump said during a White House ceremony where he was swearing in aides. “So we’ll be helping out the state of Georgia.”

Several homes appeared to be destroyed along on a road within about 2 miles of the mobile home park, with cinderblocks scattered on the ground, and pine trees uprooted and snapped in half. The tops of broken utility poles lay alongside the road.

The South Georgia Motorsports Park in Cecil was heavy damaged; a grandstand was ripped apart. Barrels, signs, insulation and garbage were strewn over the speedway and parking lot.

Georgia’s governor declared a state of emergency in seven southern Georgia counties, freeing up state resources to assist with recovery efforts. “Our thoughts and prayers are with Georgians suffering from the storm’s impact,” Deal said in a statement.

Two of Sunday’s deaths occurred when a mobile home was struck by an apparent tornado in Brooks County, which moved the home roughly 100 yards before dawn Sunday.

“A tornado hit a mobile home, picked it up and put it in the middle of Highway 122,” Brooks County Coroner Michael Miller said. “I don’t know if it rolled or was lifted, but it blocked the entire highway.”

Catherine Howden of the Georgia Emergency Management Agency said earlier Sunday that the deaths occurred in Cook, Brooks and Berrien counties in southern Georgia near the Georgia-Florida line. She said another 23 people were injured.

The sheriff’s office and coroner in Berrien County could not immediately be reached for comment Sunday, their phones met repeatedly with busy signals.

While the central part of the U.S. has a fairly defined tornado season — the spring — the risk of tornadoes “never really goes to zero” for most of the year in the southeast, said Patrick Marsh of the Storm Prediction Center in Norman, Oklahoma.

January tornado outbreaks are rare but not unprecedented, particularly in the South. Data from the Storm Prediction Center shows that, over the past decade, the nation has seen an average 38 tornadoes in January, ranging from a high of 84 in 2008 to just four in 2014.

The last time the prediction center issued a high-risk weather outlook — where forecasters are very confident of a tornado outbreak — was in 2014. Sunday marked only the third time since 2000 that any part of Florida had been at a high-risk for severe weather, Marsh said.

“This is a pretty rare event in this location,” Marsh said.

If the storm fatalities reported so far this year — four each in Alabama and Mississippi and the 11 in Georgia — are all attributed to twisters, this January’s death toll would be worse than 1999. That year, 18 people died in series of storms in Texas, Arkansas and Tennessee.