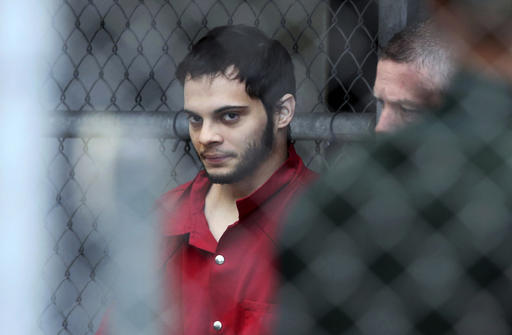 In this Jan. 9, 2017, file photo, Esteban Santiago is taken from the Broward County main jail as he is transported to the federal courthouse in Fort Lauderdale, Fla. Just weeks before a gunman opened fire at Fort Lauderdale’s airport, he walked into an FBI office in Alaska telling authorities the government was controlling his mind and that he was having terroristic thoughts. Authorities say such walk-ins are a daily occurrence around the country. Assessing whether the people are reporting a credible threat or whether they need medical help is extremely difficult and drains already-stretched law enforcement resources. (Amy Beth Bennett/South Florida Sun Sentinel)

FORT LAUDERDALE, Florida (AP) — The man suspected of fatally shooting five people and wounding six others at a Florida airport told investigators initially he was under government mind control and then claimed to be inspired by Islamic State websites and chatrooms, authorities said at a hearing Tuesday.

Ferlazzo testified at a bond hearing that Santiago mentioned after the shooting that his mind was under some kind of government control. Later in the interview he claimed to have been inspired by Islamic State-related chatrooms and websites, although it is not clear if the FBI has been able to corroborate any terror-related claims.

U.S. Magistrate Judge Lurana Snow set a Jan. 30 arraignment hearing for Santiago to enter a formal plea. Snow ordered Santiago kept in custody as a risk of flight and a danger to the community, which Assistant U.S. Attorney Rick Del Toro said was clear from his actions at the airport.

“He has admitted to all of the facts with respect to the terrible and tragic events of Jan. 6,” Del Toro said. “These were vulnerable victims who he shot down methodically.”

Santiago could get the death penalty if convicted of federal airport violence and firearms charges that resulted in death. His public defender, Robert Berube, said Santiago would not contest the pretrial detention order.

“Mr. Santiago is prepared to remain in custody,” Berube said.

Investigators say Santiago legally brought a gun box containing his weapon and ammunition as checked luggage for his flight, then retrieved it at the Florida airport and went into a bathroom. After loading the gun, authorities say he came out firing randomly and then laid down on the floor after using all 15 bullets in two clips.

Much of the hearing focused on Ferlazzo’s testimony about what Santiago said after the shooting and what records from Alaska reveal about him.

Ferlazzo said Santiago, an Iraq war veteran who was a member of the Puerto Rico and Alaska National Guard, visited a gun range late last year before booking the one-way ticket from Alaska to Fort Lauderdale. It was previously reported that Santiago visited the FBI office in Anchorage last year complaining about hearing voices and supposed CIA mind control, which led to Anchorage police temporarily seizing his gun and Santiago’s brief stay in a mental hospital.

At the Alaska Psychiatric Institute, Ferlazzo said, records show Santiago was given anti-anxiety medications but no prescriptions for drugs that would treat serious mental conditions such as schizophrenia. He was released after a five-day stay with no restrictions that might prevent him from possessing a gun, and his weapon was returned by police.

“He was deemed to be stable,” the agent testified.

In the post-shooting interviews, Santiago at first repeated claims that he did it because of government mind control but later told investigators he had been visiting chatrooms and internet sites frequented by the Islamic State terror group or those inspired by it.

“It was a group of like-minded individuals who were all planning attacks,” Ferlazzo said.

The FBI is examining Santiago’s computers and other devices as well as those of family members, but so far agents have not confirmed any terrorism ties.

Other evidence collected so far includes video from 20 different airport camera angles that show the entire shooting episode, Ferlazzo testified. In addition, the roughly six-hour interview in which Santiago supposedly confessed was audio and video recorded.