HOUSTON – In a tale of two halves, the Alcorn State University football program jumped out to a 17-0 lead at the intermission, but Grambling State came back to take a 27-20 decision in the SWAC Championship game Dec. 3 at NRG Stadium.

Junior De’Lance Turner rushed for 129 yards, the second-most in his career in a single game, and a touchdown. He also caught a pass for 57 yards. Junior Lenorris Footman threw for 259 yards and rushed for a score. Footman spread the ball around and completed four passes to junior Norlando Veals for 86 yards. He also connected with senior Collins Moore four times for 45 yards, and junior Jalen Walker twice for 45 yards.

The Tigers were guided by Martez Carter who ran for 136 yards and a touchdown. Devante Kincade finished with 237 passing yards and a pair of touchdowns. On defense, De’Arius Christmas ended with 12 tackles while Arkez Cooper had 10. Play-By-Play Summary On Alcorn’s opening drive, it elected to punt on fourth-and-one in its own territory, but the Tigers jumped off-sides which gave the Braves a fresh set of downs. Alcorn made its way to midfield after a catch by Moore, but had to bring out the punting unit again as senior Haiden McCraney pinned Grambling at its own 18-yard line. On the ensuing drive, the Tigers got to the Alcorn 23-yard line after a 49-yard rush by Jestin Kelly through the middle. Grambling tried to run it again but junior O.J. O’Neal forced a fumble and Anderson made the recovery to end the threat. The Braves cashed in on the turnover as Footman scrambled 15-yards to the left for the touchdown. The score was set up by a 57-yard pass to Turner as Footman rolled out to the right and passed back across his body to the left where Turner was wide open and rushed about 40 yards down the sideline.

On Alcorn’s next drive, a 15-yard facemask on the Tigers, followed by consecutive rushes by junior Silas Spearman got the Braves into Grambling’s territory at the 35-yard line. The Braves were then looking at a fourth-and-five on the 30-yard line when they decided to go for it, and they completed a 16-yard pass to Veals to move the chains. On the 14th play of the drive, Alcorn settled for a 27-yard field goal and it was good by McCraney to put the Braves up 10-0 with 11:56 left in the second quarter. After a three-and-out by the Alcorn defense, the Braves scored on the very first play as Turner broke loose for a 69-yarder to increase the lead to 17-0 with 10:44 remaining in the half. Turner broke a tackle and then out-ran the Grambling secondary down the left sideline. Right before the end of the half, the Braves attempted a 40-yard field goal, but it was no good as the Braves took their 17-0 edge into the locker room. The Tigers opened the second half with a big kick return all the way out to the Alcorn 25-yard line.

After a sack by senior Stacey Garner, Grambling was situated with a 4th-and-14 but threw a deep ball over the middle which was caught for a 29-yard touchdown by Verlan Hunter. Grambling further cut into the deficit 17-14 on its next drive. The Tigers used passes of 33 and 31 yards, respectively to move to the Alcorn one-yard line. Grambling scored on a one-yard rush by Lyndemiam Brooks. Near the end of the third quarter, the Braves were threatening at the Grambling 30-yard line after a first down catch by Veals, but Grambling registered a sack and fumble to change the possession. On the following series, the Tigers faced a 3rd-and-19 when senior Michael Brooks recorded a sack but was called for a 15-yard horse collar penalty which moved the ball from the Grambling 32 to the Alcorn 41. The Tigers got to the Alcorn 26, but a sack by Hurns on third down pushed them out of field goal range as Grambling had to punt. The Braves started their next drive with a 22-yard pass to Veals. Back-to-back 13-yard rushes by junior Arron Baker moved the ball to the GSU 25.

Alcorn pushed its lead up to 20-14 after McCraney snuck a 41-yard field goal inside the post with 9:46 remaining in the game. Grambling answered with a six-play, 62-yard drive that was capped by an awkward scoring play. Kincade completed a 26-yard pass to Carter who fumbled inside the five-yard line but the ball popped right into the hands of Dominique Leake in the end zone for a touchdown. The extra point was blocked as the score was tied 20-20 at the 7:25 mark. The Tigers took their first lead of the game 27-20 on a 31-yard rush by Carter with 3:38 to go. Carter had rushes of 31, 22 and 15 yards on the drive. The Braves took over with 3:34 remaining, but on 2nd-and-20 Footman’s pass was tipped and intercepted by Grambling’s Jameel Jackson near midfield.

Alcorn had one last chance as it took over at its own 12-yard line with 1:18 left but no timeouts. After a trio of short gains, Footman connected with Walker at the Grambling 33-yard line with one second left. Footman’s hail mary attempt fell incomplete along the right side of the end zone on the final play. 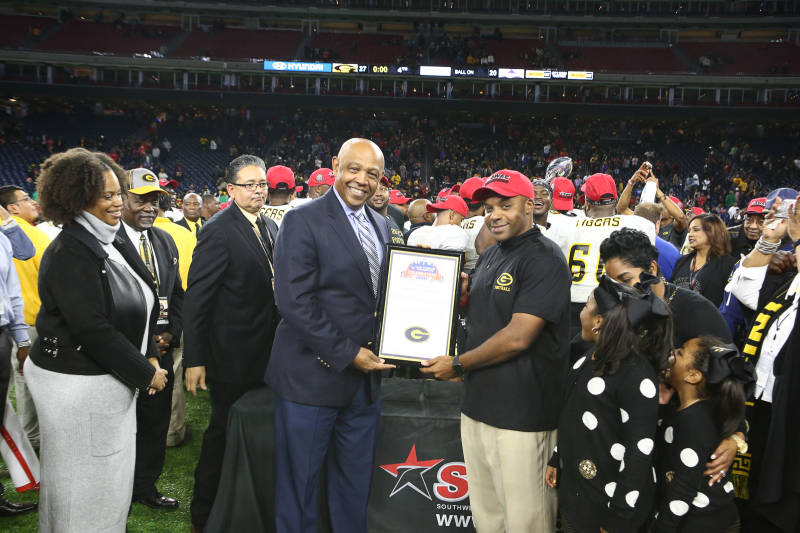 OXFORD, Miss. (AP) — Mississippi coach Hugh Freeze hopes star receiver Laquon Treadwell scores a touchdown every time he touches the ball this season for Ole Miss. Except once. “In a strange kind of way,” […]

CURRY: Selling Out Black College Football to Make a Buck

Editor, NNPA
I cringed as the scores came in over the weekend. Ohio State 76, Florida A&M 0. Florida State 54, Bethune-Cookman 6. Miami 77, Savannah State 7. Our HBCUs have traded their proud, rich football heritage for money. And I don’t think it’s worth it… […]