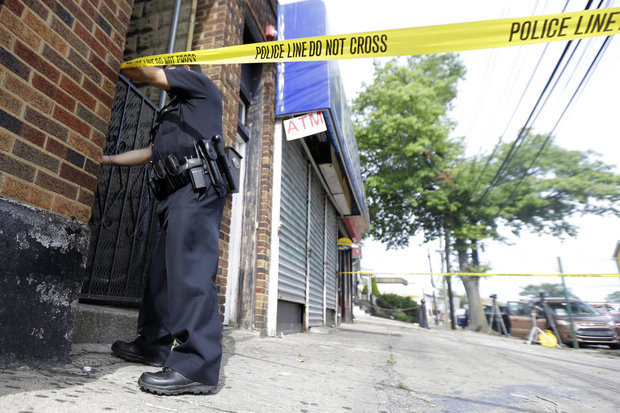 A narrative of the incident provided with Wednesday’s statement says Gaines, who was black, was fatally shot on Aug. 1 after she barricaded herself inside her apartment and pointed a shotgun at officers attempting to serve an arrest warrant. (Julio Cortez / AP)

TOWSON, Md. — No one will be charged in the shooting death of a woman during a standoff with police that she posted on social media, a Maryland prosecutor said Wednesday.

A review of the police investigation into the shooting of 23-year-old Korryn Gaines in Randallstown last month found the officer who fired was justified, and the state will not take any further action, Baltimore County State’s Attorney Scott Shellenberger announced in a statement.

“Criminal charges are not warranted,” the statement said.

A narrative of the incident provided with Wednesday’s statement says Gaines, who was black, was fatally shot on Aug. 1 after she barricaded herself inside her apartment and pointed a shotgun at officers attempting to serve an arrest warrant. Gaines’ 5-year-old son was with her and was injured. The warrant stemmed from a March 10 traffic stop that included disorderly conduct and resisting arrest.

The narrative provided Wednesday says that police were told by Gaines’ fiance after the standoff started that she suffered from a mental illness and had not been taking her medications. The statement says during the standoff there were times when Gaines spoke calmly and others where she “screamed and acted irrationally.” She said repeatedly that the police had no authority over her and were there to kidnap her. She also said “that when she and her son were dead the news would report it and the world would know, and that it would be worth it as she took at least one of the officers with her,” the narrative said.

The narrative says she was shot after she stopped communicating with officers and an officer saw her starting to raise the shotgun to a firing position toward officers.

Lawyers for Gaines’ family have said she was shot because officers ran out of patience during a seven-hour standoff. Gaines posted video of the standoff on Facebook, but her account was taken offline in the midst of the standoff after a request by police. Police Chief Jim Johnson has said that people on social media were encouraging her not to comply with officers.

Shellenberger met with Gaines’ family before announcing that no charges would be filed. The family’s attorney, J. Wyndal Gordon, says the meeting reinforced the family’s belief that the officer shot Gaines “out of frustration rather than fear.” He called the officer a “cowboy” who “wanted to use his weapon.” Gordon said Gaines’ family is frustrated.

Gaines’ death led to protests affiliated with the Black Lives Matter movement. A wrongful-death lawsuit filed last week against the police officer and Baltimore County contends that officers illegally entered Gaines’ apartment after persuading the manager of her apartment complex to give them a key despite the fact that nobody answered the door when officers knocked.

In a letter to County Executive Kevin Kamenetz on Tuesday, the NAACP Legal Defense Fund called for an independent review of county police department policies, saying Gaines’ shooting raises questions about policies, including use of force and execution of arrest warrants. Kamenetz said in a statement he has directed the police department to also conduct a review of the case and has asked the police chief to review “best practices and procedures utilized by police across the nation in barricade encounters.”

The police department has identified the officer who shot Gaines as Officer First Class Ruby, using only his last name and rank, per departmental policy. Ruby was one of two officers who shot and killed 24-year-old Adam Benjamin Rothstein in 2007 after he pointed what turned out to be a pellet gun at the officers.

Armacost said officers received a call on Aug. 19 of that year for a suicidal man who had told the 911 dispatcher that he had guns, knives, pepper spray and a Taser. When police confronted Rothstein, he said he would start shooting if he didn’t get what he wanted by 3:30 a.m. At the designated time, Rothstein raised a gun and pointed it at the officers, who both fired. Rothstein’s weapon turned out to be a BB gun.