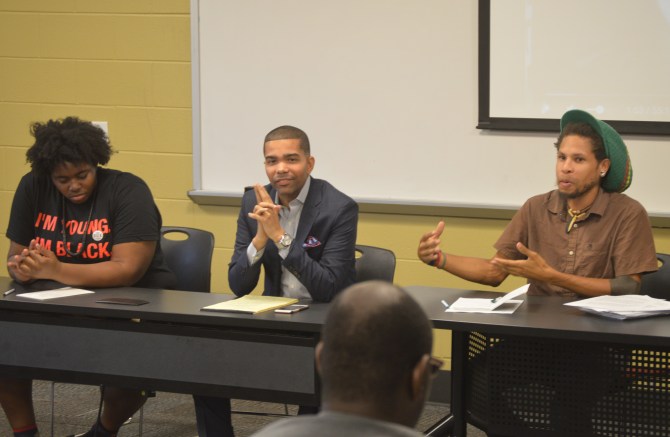 According to program planners, many black people feel as if their votes don’t count. The series is open to the public, along with students and members of the Tougaloo community to raise the importance of voting among students and community members. Lumumba began by explaining how voting relates to the black community.

“In reality, America has not gone wrong, America has never been right,” he said. “With the issues that the African-American community is facing; voting rights is just one of the issues. We have to consider how to find a new approach to an old problem,” said Lumumba. In this time, according to Lumumba, “… now more than ever, we as blacks should come together and understand that we need to be more aware of our voting rights. We need to know who, what, when, where, why and how as it comes to getting our voices heard.”

He related words of wisdom from his father, the late Jackson Mayor Chowke Lumumba, asserting that his comrades drafted his father. “We have to give the people something tangible, something the people can feel from community to community.” Representing Cooperation Jackson, King explained his organization’s position that “one may ‘work’ the job, but they also ‘own’ the job.” He expressed the importance of owning your own business and working for yourself. He described how many African Americans once owned their own co-ops.

“A lot of us may know about Fannie Lou Hamer; she also owned her own co-op,” said King, who noted that Freedom Farms can be attributed to Hamer. “They collected money together, They went door to door mom-and-pop style,” he said. King said more people know the story about how Hamer went out to try to vote.

Word of her efforts got back to her boss, and she was fired from her job and put off sharecropper’s land. That created Freedom Farms, he said. That is why blacks in the community have to stick together, because no one else was looking out for them, King said. Freedom Farms is an example of blacks working and sticking together.

Offiah addressed the audience by first asking them, “Who in this room is registered to vote? How many people in this room know someone who is old enough to vote but hasn’t?”

Tougaloo College continued the voting awareness series throughout the week with other speakers. On Sept. 20, the theme of the evening event was “Why Voting Matters” with Dierdre Payne, poet and political commentator.

The series culminates with the last day when one can register to vote in the presidential election. For more information, contact Attorney Timothy Howard, director of the Reuben V. Anderson Pre-Law Program at Tougaloo at (601) 977-7860.

Chinyere Brown is a senior and mass communications major at Tougaloo College.