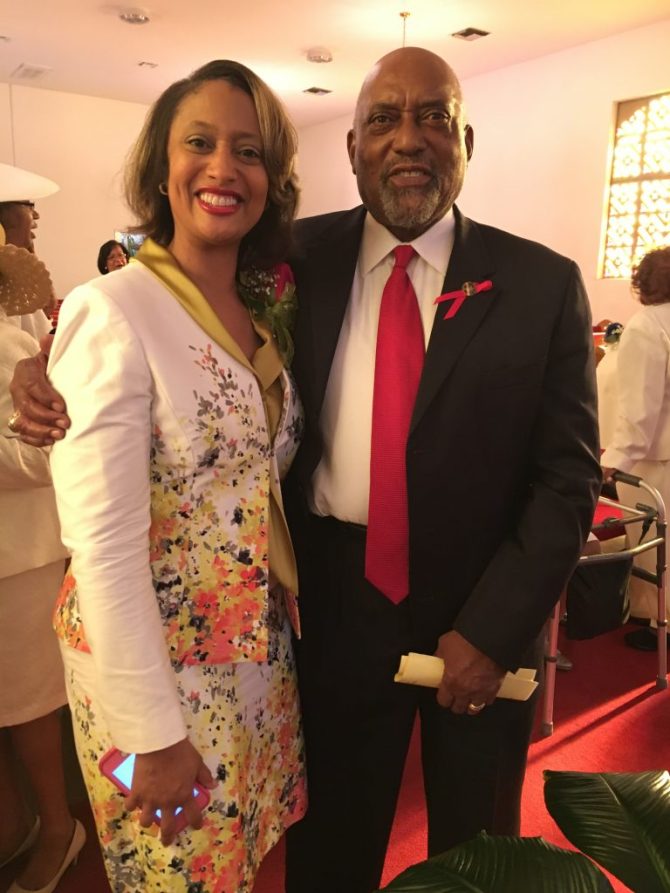 Campbell was supported by her dad, Leon Campbell.

It was during this service that the mission sisters were rededicated to their mission work. After being introduced by College Hill member Debra McGee, Campbell told the audience the way they do it in the AME church is they hit it, hope the spirit gets it and then they let you go.

Taking off on the theme “Seeking to Serve Like the Master Server” Campbell delivered an address with the energy of a Baptist minister. She talked about serving with a pureness in your heart rather than serving in hopes of receiving awards. “Your serving is not pure if you are doing it for yourself,” said Campbell. Throughout her message, she received thunderous applause from the mission sisters and congregation. Campbell explained that everyone has an anointing to serve in some capacity and one should listen for their own calling; whereas, many people want to do things that someone else was called to do.

Campbell made several points the audience seemed to agree with as they shouted “amen” over and over again and applauded time and time again. Some of the points she made were before you can become a “queen bee, you have to be a worker bee.”

She advised the congregation to focus on your own anointing, own your light and let it shine and help to ignite the candles of others when you are God’s child. She also said no one can stop you from getting your blessings and as a true servant you must help someone else along the way. There are seasons when you are to toil and plant and wait to reap the benefits, she said, and don’t let the world tell you your value for the world will devalue you; you must be plugged into the master. Each of these points Campbell developed with an energy that continued to build momentum to the very closing of her message.

College Hill pastor, the Rev. Michael T. Williams, in his remarks said, “Wow, all I can say is simply wow.” He thanked Campbell for being such a blessing to the Christian community and stated her message was not just for the mission sisters but for all present. Campbell’s father, Leon Campbell, a former Murrah High School football coach, said he was very proud of his daughter. Mission President Mildred Kelly said she remembered Campbell when she was a young ballerina. She said, “Never in my wildest dreams did I know the ballerina would one day become an attorney.” LaDonna Jacobs, mistress of ceremony, thanked Campbell for bringing such a motivational message.