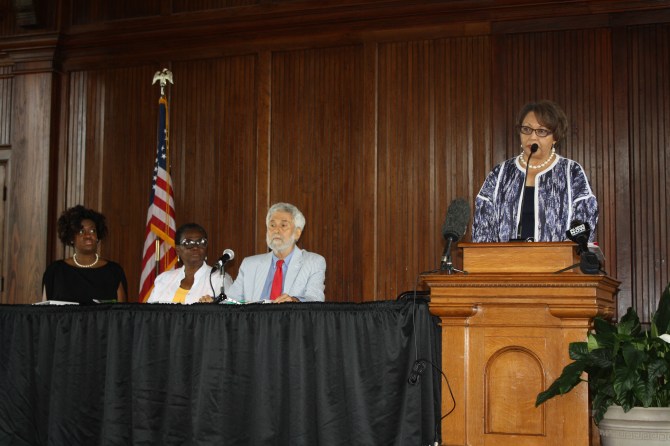 Tougaloo College has made history by establishing the first Institute for the Study of Modern Day Slavery at a Historically Black College and University and in the nation.

The announcement was made Aug. 8, during a press conference at the Woodworth Chapel on campus.

“The study of modern day slavery is an important issue for us,” said Beverly Hogan, Tougaloo College president. “Purveying the expanse of modern day slavery in the United States, it became clear that it was imperative for us to address this particular issue that threatens the fabric of civil society within the context of academia.”

Modern day slavery is a form of human bondage, which involves various forms of enslavement such as forced labor, including women and children, trafficking and sex trade, people forced into manual labor in urban sweat shops or rural fields, victims of debt and people born into servitude. While historical slavery is an established area of academic study and research, contemporary slavery has not been equally addressed in academia.

Tougaloo became interested in the study of modern day slavery after collaborating with Brown University to sponsor a conference on the legacy of historical slavery a few years ago.

A $550,000 grant from the Andrew W. Mellon Foundation was used to establish the new institute.

Through the institute, scholars, students, activists, policymakers, schools and other community networks will come together to raise awareness of modern day slavery and find solutionxs to eradicate social, racial and civic injustices.

Tougaloo College was founded in 1869 on land of a former plantation owner. Hogan noted the college’s history is a narrative of progression of “former slaves to citizenship to scholarship to leadership.” She also noted that since the end of Reconstruction, Tougaloo College has been a leader in the quest to provoke freedom, equality and justice for all.

“This (institute) is a natural progression of our legacy of social justice and change in this 21st century,” Hogan said. “This initiative allows the college to extend its time-honored mission of education and the pursuit of democracy, social justice and equity and developing scholarship, curriculum, pedagogy and civic engagement in response to the problems of modern day slavery. We believe modern day slavery limits individuals in society just as severely as historical slavery.”

Co-directors of the institute are Tougaloo professors Stephen Rozman and Johnnie Maberry.

Rozman explained the Mellon Foundation chose Tougaloo because of its history, but the foundation also requires other institutions to be involved. Morehouse College and Bennett College have met with Tougaloo officials to collaboratively establish the new institute. Brown University, Vanderbilt University and Historians Against Slavery are other partners.

“We are going to development something that links together all of these struggles against slavery, the civil rights struggles … we want to deal with the continuity of slavery and bring in Jim Crow, the struggle against Jim Crow, and really have something where all these pieces are connected within our institutions,” Rozman said.

“Tougaloo has always been involved in social activism … now with modern day slavery we get to show just how we feel about the things in society that should not be,” said Maberry. She also noted how community organizations already working on the issue will be asked to get involved.

Daphne Chamberlain, assistant professor of history at Tougaloo, shared that 20.9 million people around the globe are affected by modern day slavery.