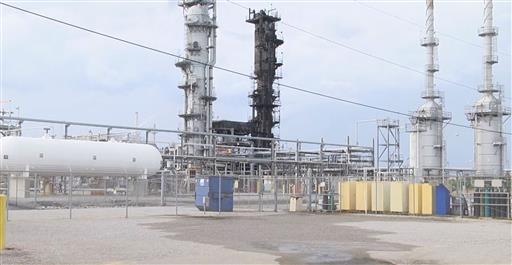 This video frame grab taken Tuesday, June 28, 2016, by WKRG-TV 5 of Mobile, Ala., shows some of the fire damage at a natural gas plant near Pascagoula. Two explosions and a fire rocked the natural gas plant in southern Mississippi on Monday night, but no one was injured and flames continued for hours Tuesday, authorities said.
Chad Petri/WKRG

Rick Rainey, a spokesman for Houston-based Enterprise Products Partners LP said Thursday that the operator can’t predict when the Pascagoula plant will restart.

The plant extracts liquids from natural gas, sending the gas to users and the liquids to plants making propane and butane. Because the plant isn’t running, some oil and gas platforms in the Gulf of Mexico are limiting production. Some natural gas is being diverted to another connected pipeline, according to online notices, but capacity is limited.

Rainey says the company hasn’t completed its investigation into what caused the plant to blow up, and is also cooperating with inquiries by two federal agencies. Flames shot from the plant for hours after the explosions.