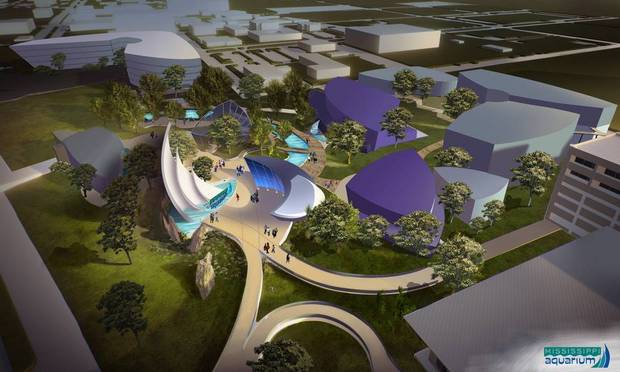 A Louisiana firm has been hired to market the Mississippi Aquarium, a $65 million facility to be built in Gulfport. (Concept Art by PGAV Destinations)

GULFPORT, Mississippi (AP) — The Gulfport Redevelopment Commission plans to hire a Baton Rouge, La., firm to market The Mississippi Aquarium, slated to for a downtown space across from Jones Park.

“We tried to look at all the proposals fairly to see what the best fit was going to be for what we needed,” Meadows said. “When the dust settled, MESH was outstanding.”

MESH will be responsible for the marketing campaign to raise money for the $65 million aquarium, launch the project and, during the aquarium’s first year, work on funding to sustain it. The ambitious campus that will incorporate the coastal environment and its marine life, from fresh water to saltwater, is under design and is supposed to open in early 2019.

“I think any reasonable person would expect it to go to a Mississippi firm,” said Ted Riemann, owner of The Prime Time Agency in Gulfport and managing partner of Big 3. “But with that said, I’m old enough to know life throws you curve balls and you just have to move on.”

Representatives of MESH declined to comment on the firm’s selection because the contract has not yet been negotiated and signed. Meadows expects contract negotiations will take place next week.

“The committee members went into it with a clean slate,” she said. “We were looking for that group that had the spark we needed for such an incredible project as this. It is not your normal project. We just needed that group that seemed to get it perhaps better than other groups got it. It was just a spark, an energy, an enthusiasm.”