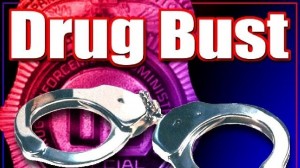 JACKSON, Miss. (AP) – The Jackson Police Department has seized drugs, money, guns and ammunition as a result of a tip from the community.

Jackson police spokeswoman Colendula Green says in a release that detectives arrested 26-year-old Lorenzo Loggins on Wednesday and charged him with possession of marijuana with intent to distribute with a gun.

Police received a tip Wednesday about drug activity at a North Jackson residence. Green says that when police served a search warrant, they seized about two pounds of marijuana, two handguns, two assault rifles, several rounds of ammunition, drug paraphernalia and $1,800 in cash.

The release says Jackson Police urge residents to continue to use the drug hotline by calling (601) 960-0025.

BAY ST. LOUIS, Mississippi (AP) — Authorities in Hancock County say 13 people have been arrested in a weekend roundup of drug suspects. And several others were being sought. Officials say some of the suspects […]

By Stephanie R. Jones Contributing Writer On Tuesday morning Hinds County Sheriff Victor Mason stood behind a table in his office topped with more than $1 million in allegedly illicit cash confiscated during a traffic […]