June 5, will mark 50 years since James Meredith, who integrated the University of Mississippi in 1962, began a walk from Memphis to Jackson to make a positive difference in the world.

Despite countless reports referring to Meredith’s endeavor as the “March Against Fear,” the civil rights icon has always considered the event his personal “Walk Against Fear” as a citizen.

“I never participated in a March (Against Fear),” Meredith said Wednesday morning. “A few people use my language (in describing the 1966 event). I was a soldier.”

One day after he began his walk, Meredith was shot during the walk. Following the shooting, leaders of the Civil Rights Movement came to Mississippi to complete his walk. Those leaders protested and called their efforts the “March Against Fear.” It became the biggest civil rights march in Mississippi. After being released from the hospital, Meredith completed his walk in Jackson on June 26, 1966.

To commemorate the 50th anniversary of the event, a “Walk for Good and Right”  is being planned by the James Meredith Institute from June 5-26 to retrace his earlier path. The event is not a literal walk. A release from the institute reports the goals of the commemoration are for all citizens to highlight the need for a stronger moral code among black Americans as well as Americans of all races; be encouraged to stand up for the constitutional rights of everyone within the jurisdictions of the United States; and to promote higher and deeper self-education through renewed use of the library.

Meredith stated that “while these may seem to be unrelated goals, the common idea is that if we are a well-informed, ethical and individually courageous citizenry, we can make America achieve its true potential,” according to the release.

Meredith calls on all citizens in and outside of Mississippi to meet at local libraries to discuss how citizens can get beyond partisan political rhetoric and begin to actively build the America as promised by the Declaration of Independence and the U.S. Constitution.

The commemoration of the 1966 walk will cause Meredith to be extra busy during June and July. During July he will give some 15 speeches at libraries in Hinds County, he said, and he plans to be in Memphis on June 5, to retrace steps of his walk.

The theme of his speeches will be “God’s Message For Our Times – What Blacks in Mississippi Can Do For Themselves.” Main points of his message will include how every black community should focus on what’s good and right, how adults should train up children in the way they should go and how all children should be taught the 10 Commandments and Golden Rule by age 5. Meredith also plans to share his thoughts on why the most important people in Mississippi are black women older than 30 and that they should all be godmothers.

Though Meredith is not directly involved in planning the anniversary events, he has told organizers they have his complete support.

He’s also grateful for an exhibition at the Smith Robertson Museum and Cultural Center, 528 Bloom St., in Jackson that opened April 14, called “James Meredith: Am I Or Am I Not a Citizen.”

“ ‘Am I or am I not a citizen?’ that was the question I proposed to the Kennedy Administration,” Meredith said.

The exhibition is the first one to accurately display his language, he said. It features several photos of Meredith integrating the University of Mississippi in 1962 as well as a classroom exhibit showing Meredith sitting in class at Ole Miss. A timeline is on display of Meredith’s events from applying to Ole Miss until he graduated and sent a letter to President John F. Kennedy.

The exhibition also includes the Associated Press photo taken when Meredith was shot and while viewing the display a recording is played of President Kennedy and Gov. Ross Barnett discussing Meredith’s enrollment at Ole Miss.

According to the release,  Meredith’s goal has always been to illustrate that a citizen’s rights do not need mass demonstration, and that it is the duty and responsibility of the state to protect the rights of all citizens. “The U.S. Constitution is clear that no state can deny to any person within its jurisdiction the equal protection of the laws,” Meredith said.

For more information visit www.jamesmeredithbooks.com or contact the James Meredith Institute at (662) 483-0656, or by email at info@meredithcitizen.org. 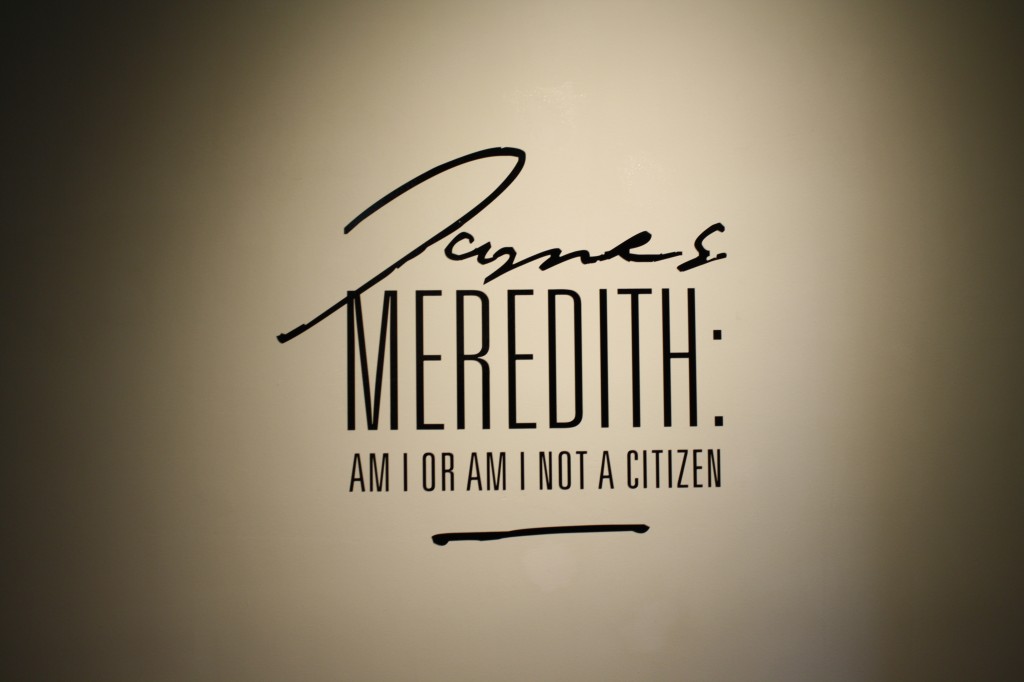 Dean Kathleen McCartney has announced that Civil Rights activist, author, and political adviser James Meredith will receive the Harvard Graduate School of Education Medal for Education Impact, the highest honor given by the school, and speak at the 2013 Convocationceremony on May 29.

“Just over 50 years ago, Mr. Meredith walked through the doors of the University of Mississippi, becoming the first African American to enroll in the previously segregated school. In doing so, he forced America to look in the mirror and become a better nation. Fifty years later, he is still working to address inequality in America’s schools,” McCartney said. “At HGSE we know that education is a civil right. James Meredith endured beatings and bullets to fight for that right. His courage and determination cannot be overstated. Today, we all walk in his footsteps and through the doors he opened.”

According to Meredith, the award will be the first he has accepted in 50 years. […]

Campaigning was challenging and winning the election was rewarding, but making history in the process is mind-boggling for Courtney Roxanne Pearson, who recently became the University of Mississippi’s first African-American homecoming queen.

The 21-year-old senior English secondary education major from Memphis won the title in a run-off during annual campus personality elections. […]

(AP) A former student at the University of Mississippi pleaded guilty Thursday to a misdemeanor charge arising from a noose placed on a statue of civil rights activist James Meredith. At a brief court appearance, […]