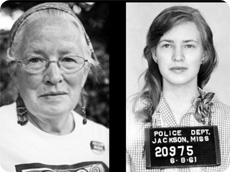 Joan Mulholland was arrested at age 19, in 1961 for civil rights work in Jackson.

Joan Trumpauer Mulholland, winner of a 2015 Freedom Award from the National Civil Rights Museum in Memphis, will deliver the keynote address during the 10th Annual Creative Arts Festival: Ordinary Heroes ~ The (Un)Examined Life at the Margaret Walker Center at Jackson State University.

Featuring student performances and panel presentations, the Creative Arts Festival will take place April 15-16. The keynote address will be at 3 p.m. April 16, in the JSU Student Center Theater.

By the time she was 19 years old, Mulholland had participated in over three dozen sit-ins and protests, and she had been put on death row in Mississippi’s notorious Parchman Penitentiary with other Freedom Riders. She was involved in one of the most famous and violent sit-ins of the civil rights movement at the Jackson Woolworth’s lunch counter in 1963, and she helped plan and organize the March on Washington.

For her actions as a white southern woman, she was disowned by her family, attacked, shot at, cursed at, and hunted down by the Klan for execution. She has been written about in several books and has appeared on television and news programs like Oprah and the CBS Nightly News. And, her story and experiences have been highlighted in award-winning documentaries including An Ordinary Hero, PBS’s Freedom Riders, and the groundbreaking film Eyes on the Prize.

Mulholland has received numerous awards for her activism including recognition, along with other female Freedom Riders, by President Barack Obama; the Anti-Defamation League Annual Heroes Against Hate Award; and a 2015 Freedom Award from the National Civil Rights Museum.

The Creative Arts Festival will kick off with a screening of the documentary “An Ordinary Hero” about Mulholland’s life at 2 p.m. April 15, in room 166/266 of the Dollye M.E. Robinson College of Liberal Arts. The film will be immediately followed by a discussion with Mulholland; her son and filmmaker Loki Mulholland; Dr. Elayne Hayes-Anthony, dean of the School of Journalism at JSU; and Dr. Rickey Hill, chair of JSU’s Department of Political Science. A reception will be held from 4-6 p.m. April 15, at the Margaret Walker Center in Ayer Hall for the opening of the exhibition An Ordinary Hero.

On April 16, student presentations will take place over the course of the day during concurrent sessions in the JSU Student Center and a luncheon and poetry reading with the JSU ensemble Outspoken will be held at 12 p.m. in the Student Center Ballroom B.

The keynote address by Joan Mulholland and an awards ceremony, including the annual $1,000 Margaret Walker Award for the best essay by a JSU student, will conclude the Festival at 3 p.m. in the Student Center Theater.

All events are free and open to the public.

This project is supported in part by funding from the Mississippi Arts Commission, a state agency, and in part from the National Endowment for the Arts, a federal agency.

For more information, visit the center’s website at www.jsums.edu/margaretwalkercenter or contact the Center’s staff at (601) 979-3935 or mwa@jsums.edu.