Carlos Moore, a Grenada attorney who filed a federal lawsuit Feb. 29, against Gov. Phil Bryant to remove the Confederate emblem of the state flag, was joined by about 300 supporters Tuesday at the state Capitol for a change-the-flag rally.

At various times during the rally, Yarber, Moore, and Pastor Bryant led the crowd in chants to “bring it down!”

“For 151 years since the Civil War ended, Mississippi has not seen the light,” Moore said as he addressed the crowd. He described the flag as treacherous and a relic of slavery. “Enough is enough is enough,” he said.

Though Moore has not heard directly from Bryant regarding the lawsuit, he is aware of the governor’s comments to media alleging that only the state Legislature can change or remove the flag.

“I heard that and that’s a bold-faced lie,” Moore said. He then pointed to the flag flying at the Capitol. “You see the flags are flying at half-staff. He (the governor) ordered the flags to fly at half-staff in memory of Nancy Reagan. The governor is over the flag. He can order it taken down at any point. He’s the chief executive of this state.”

Mississippi is the only state that continues to incorporate the Confederate emblem as part of its state flag.

Moore revealed that Judge Carlton Reeves is the justice who will make the decision in his lawsuit against Bryant. Reeves is a graduate of Jackson State University and was appointed by President Barack Obama in 2010.

In his comments, Gordon talked about the concerns his parents and family had about him coming to Mississippi on Tuesday, but he came anyway. “For many the Confederate battle emblem represents pure anathema. It’s extremely divisive and serves as a constant reminder of this country’s permanently stained history of slavery,” Gordon said.

Bamberg offered insight into what South Carolina went through last year to remove the Confederate flag in that state saying the leaders there exhibited political courage.

“If your governor needs to see an example of what it means to lead as governor maybe he should look at South Carolina’s very own Republican governor – Nikki Haley. She exhibited leadership at a time when our state needed it most,” Bamberg said.

On June 17, 2015, nine people were shot and killed at Emanuel African Methodist Episcopal Church in Charleston, S.C., by Dylan Roof, a white supremacist. Photos of Roof holding the Confederate flag surfaced after the shooting.

Slater, who is white, specifically addressed white Christians saying, “that flag has nothing to do with Christianity. When we were growing up our mothers did not share with us the terrors that flag represented. It’s time for white Christian Mississippians to put away the things of childhood and face the flag for what it is. That Confederate flag is a symbol of white supremacy.”

Before introducing the keynote speaker, Mayor Yarber discussed why Moore’s lawsuit is essential and timely since proposed legislation failed in the Legislature this session.

“I just believe down in my sanctified soul that this is the beginning of a real movement,” Yarber said. “Every now and then you’ve got to do some things that go absolutely past niceties.”

Pastor Bryant was the keynote speaker for the rally. He talked about Mississippians’ resolve for enduring tragic events during the civil rights movement and confidence for victory on the flag issue.

“That flag represents the illegal kidnapping and forced labor of people who had to work against their will. This flag represents a losing team. It’s only in Mississippi that y’all are acting like sore losers,” Pastor Bryant said.

“America is in peril,” he continued and expressed that all of America should be insulted the flag debate is occurring so many years after the Civil War.

Asked whether he’ll come back to Mississippi when the flag is removed, Pastor Bryant said, “Absolutely. I’m going to be here to watch it happen. When the attorney calls me, I’m on the next flight.”

Moore, who expects a response on the lawsuit by the end of the month, was confident that even if the case goes before the U.S. Supreme Court, he will prevail.

“That flag is coming down I tell you.” 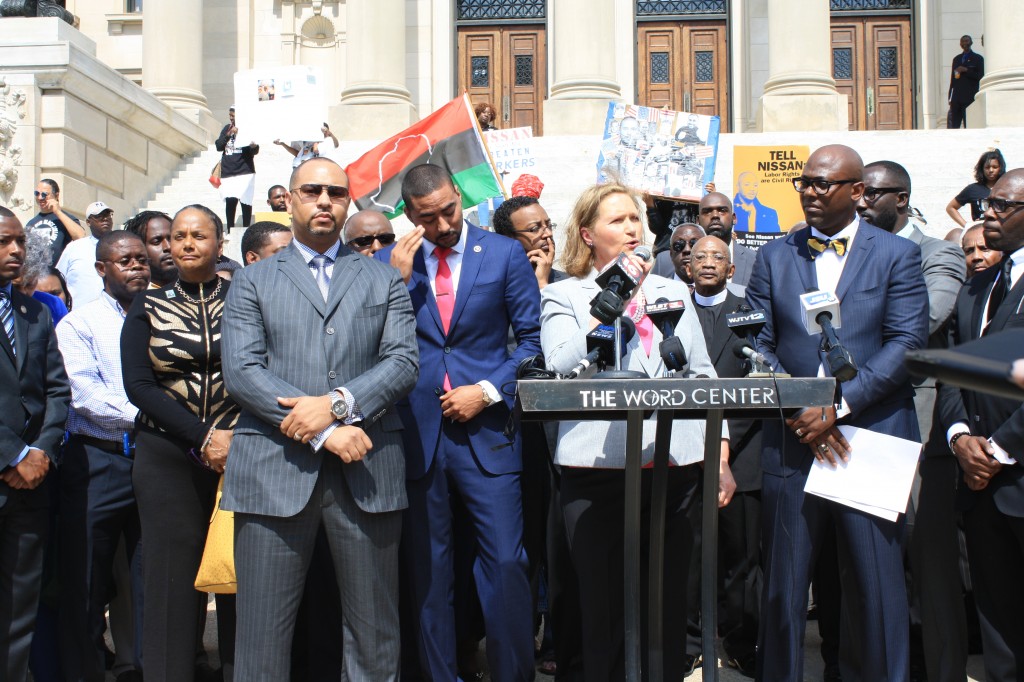 JACKSON, Miss. (AP) — Another public university in Mississippi is ending the display of the state flag on campus because it contains a Confederate battle emblem many see as divisive. University of Southern Mississippi President Rodney […]

OXFORD, Miss. (AP) — The University of Mississippi quietly removed the state flag from its place of honor on Monday, heeding the calls of those who say the banner’s Confederate battle emblem is harming the […]

TUPELO, Miss. (AP) — A man who’s known for flying a 4-foot-long Mississippi state flag on his car has been accused of bombing a Walmart because the chain stopped selling the flag, the police chief […]